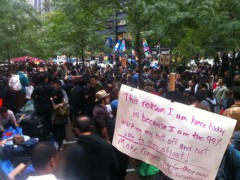 FutureChallenges.org is focussing on Occupy Wall Street – why? For us it’s a good example of what we are talking about – Occupy Wall Street (OWS) gives the correlations of megatrends a real face. It makes FC_org touchable, real! And hopefully better understandable. OWS makes the clash of at least three megatrends visible:

Globalization as we define it as the integration of national markets into one international economy reaches out to the heart of OWS’ protests. In its pure capitalism occurence the protestors call it neoliberalism – a global economic system “that attacks our human rights and destroys our environment.” It confronts the corporate world, especially financial institutions and multinationals, with peoples’ power in a way the world has never seen before.

As we describe in our definition of new governance “the impacts of globalization and the internal changes affecting sovereign states will reshape the traditional nation state from how it was known in the 20th century.” The “reshape” started out with the Arab Spring in December 2010 (we focussed on Egypt a few weeks ago, see older posts in this section) – an interactive timeline of Middle East protests you can find here. Inspired by the Arab youth people all over the world are demanding new forms of participation in governance (here you can find impressive pictures from protests from all over the world – The Big Picture, Boston Globe) searching for a better democracy – yet not at all clear what it should look like. One expression of that is “We are the 99 percent“.

The big question is how can we connect all these single dots and create something new (The Greater WE) in which all of us believe in and trust.

Actually nothing much to say here: Technology provides the tools which give people a voice that can be heard and make it possible to connect. And to visualize their actions (for example through ushahidi) …

So this is why we at FutureChallenges focus on OWS. And we invite all our bloggers from all over the world to provide us with their LOCAL perspective on “Occupy Wall Street” and give us examples of what happens in their part of the world to drive the change which “Occupy Wall Street” is becoming a symbol for. And not only them – we invite all of you to share your views!