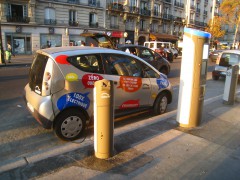 The French capital’s new electric car rental scheme Autolib’ raised high hopes as a cost-effective means of making transport more livable and environmentally-friendly in one of Europe’s largest and most-visited cities. However, the program has so far been unable to achieve the same success as the city’s similar bicycle rental service and it faces an uncertain future.

Paris is the city of the Eiffel Tower, the Arc de Triomphe and Notre Dame, but the city is also known the world over for many of the more mundane yet emblematic fixtures that dot the public landscape: Morris columns, Wallace fountains, the Art Nouveau Guimard metro entrances and… electric cars?

In December 2011 a fleet of 250 BlueCars, a small, smart-looking electric car designed by the Italian firm Pinifarina, was launched across Paris and as the program is being phased in, they are becoming more and more omnipresent. These cars are part of a program designed to provide an easy way to rent cars for as little as half and hour. The objective is to have 3,000 cars serviced by 1,000 stations placed across the city.

The design and interface will be familiar to Parisians as they are very similar to those of an ambitious bicycle renting scheme launched in 2007 that has since become extremely popular with over 200,000 yearly subscribers. Autolib’, like the eponymous bicycle service Vélib’, is a portmanteau meaning “free car”. Parisians can register either online or in one of the dozen or so Corbusier-esque kiosks where you communicate with a customer service representative via video-conferencing. For registered customers, it’s as easy as showing up, swiping a card, unplugging the car and retracting the charger into the terminal then buckling up and entering your destination into the GPS, which can provide you with the location of the closest Autolib’ station to your destination.

The logic of the program seems simple enough; convince Parisians to forgo the purchase of vehicles by providing an easy means for punctual rental of vehicles. Some studies have concluded the program will reduce the number of private cars in Paris by 22,000.

However, the debut of the service has not been without its hitches and it has been met with a lukewarm public reception. Newspapers have been chock-full of gonzo journalism recounting the many mishaps the hapless reporters encountered trying to use the cars. Reporters from magazine Le Point spent an hour trying to activate the rental with the Autolib’ card and a journalist from the website Rue89 was dismayed to find the breaks seemed to only have two positions, off or on. To add further to the Autolib’s woes, recurrent problems have been reported with vandalism and the cars’ innovative lithium-metal polymer batteries requiring four hours for a complete charge may present practical problems for users as demand increases. Yet, criticism has not only been restricted to the actual functioning of service itself.

From its inception, Autolib’ has raised objections from both sides of the political spectrum. Parisian politics can often be understood as two forces perpetually pitted against one another, those with cars versus those without. The media-friendly and openly gay Socialist mayor, Bertrand Delanoë, has been a champion of bus and bike lanes, closing down roads along the Seine to create pedestrian zones, as well as the Vélib’ and Autolib’ programs.

In keeping with tradition, criticism from opposition council members has focused on the further reduction of parking spaces to accommodate the 3,000 BlueCars. Even some environmentally-minded politicians on the Left have wondered how much the program will actually reduce the use of private cars.

In addition, Paris’ public transport system, and in particular the network of suburban trains, is in dire need of investment. Many have wondered whether the city’s money would have been better spent reinforcing existing infrastructure that transports millions of Parisians a day. While Bolloré, a French industrial group that won the contract for the program and also manufactures the BlueCars, put up most of the money for the €235 million project, the City of Paris and participating local communes have invested 35 million and the Parisian tax payer will be on the hook in case of failure.

Even before the program has been completely phased in, the future of Autolib’ seems precarious. Studies have shown that it needs 80,000 to 100,000 users. At present, this figure overshadows the just over 6,000 subscribers as announced in January of 2012. Indeed it can take a while to intercept an Autolib’ user.

After two coffees and a chapter of Zola at a strategically-placed café, I was able to corner a middle-aged couple heading across town for dinner. Gérard, a lawyer, was very enthusiastic about the service, but it was only his second time renting since January. Although he has a car, he rarely drives it in the city, using it almost exclusively when heading out of town for the weekend. He supports the service for environmental reasons, though the main attraction was that it is often cheaper than taking a cab. He and his wife could drive across town for five euros versus around fifteen to twenty, granted this does not factor in the monthly membership fees. As I left the couple a bit perplexed by my impromptu questions, they were struggling to retract the charger cable into its terminal.

All eyes on Paris

Although not the first, Paris’ ambitious Vélib’ program spawned similar initiatives across the world after the city demonstrated that it could be done on such a grand scale. The success or failure of Autolib’ will surely have an important effect on the future direction of car sharing programs. At present they remain largely confined to for-profit options such as Zip Car in the United States or the not-for-profit City CarShare in San Francisco, however, smaller scale electric car sharing programs exist elsewhere in Europe, such as Brussel’s Zen Car. If more utopian solutions are to prevail in other cities, Autolib’ must  first demonstrate its worth in the City of Lights.