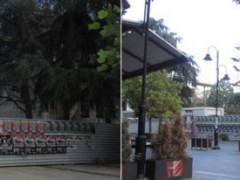 In Skopje a heated debate is being waged about who the parks belong to. On one side is the Government which believes that it is the rightful owner, and on the other is a citizens’ group “ParkDefenders” and the Association of Architects who believe that parks belong to the people.

This clash of opinions culminated in the early morning of Sunday August 4 at a time when the city was almost completely deserted due to the Ilinden holiday and the summer vacation, when, protected by police squads, workers cut down all the trees in the small park across from the hotel Bristol. Residents of the buildings overlooking the park screamed their outrage and protest, but were powerless to stop the vandalism. The trees were felled, and the mini Gezi park protests of Skopje had no effect whatsover.

Police protecting the cutting down of trees in the center of Skopje on August 4, 2013. Screen shot from the video from A1ON TV

The trees are now gone and the distinctive Phoenix sculpture will soon follow them.

The park across from the hotel Bristol in Skopje city center before and after the trees were cut down. Photo copyright: www.build.mk, the author has received authorization to use the image.

The whole area has turned into a construction site.

Construction in progress in the center of Skopje where once there was a park. Photos by the author.

Yet think again ! The trees were cut down and the park was ruined solely to give the state-run Broadcasting Council its own building. As if there was no other place in the city for them?!?

Downtown Skopje  – the marked area shows the lost park on which the new government building on Macedonia Street is being built. View from Google maps.

This determined  onslaught against green spaces in downtown Skopje started a few years ago. Spaces once occupied by trees are now replaced by the church of Sts. Constantine and Helen, the Memorial House of Mother Theresa, parking lots, a new hotel, and one new public building after the other. The people of Skopje have got used to living in a city which is a continual construction site.

The park next to street Macedonia was first shortened because of the Memorial House of Mother Theresa and now for the church of Sts. Constantine and Helen

First a parking lot was built on the place of the park next to square Macedonia. Now another construction site has been raised.

Yet only some of these new developments make an actual contribution to economic development, so the debate about Growth and Sustainability can hardly apply in the case of downtown Skopje. Sustainability is all about the  responsible use of available resources from an economic, social and environmental standpoint. In downtown Skopje it is blatantly obvious that the green spaces have not been used responsibly. Analysis by the Freedom Square Association (Плоштад Слобода) highlights the lack of foresight, the lack of long-term plans, and the failure of central and local institutions to protect and conserve the city’s greenery. The display put up by the mayor of Skopje measuring the air quality on  Macedonia Street has been long forgotten.  It should be a matter of major concern that downtown Skopje threatens to turn into an urban heat island – as the city already is compared to the rest of the country.

Air pollution is not a factor in urban planning of downtown Skopje. The display measuring air pollution was put on street Macedonia in 2011. Photo copyright: www.skopje.gov.mk, the author has received authorization to use the image.

Greenery gives people welcome respite from the relentless grey of the city asphalt surrounding them. Unfortunately, this is a luxury that the residents of downtown Skopje can no longer enjoy.