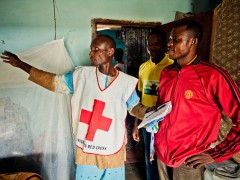 I was catching up on articles early this morning when I saw a tribute Dr Ojia Adamolekun wrote for her elder brother who died in 2004 after a car accident.

A mechanic test driving a car ran into the one he was in, and they couldn’t get an ambulance to transport him to the Teaching Hospital in Benin City; he had a head injury, a fractured right femur, and he was comatose. He died, a third year medical student who was traveling home to show his parents his excellent MBBS results.

My heart goes out to her and her family because her only other brother, a doctor as well, was shot point blank by an armed robber on the 11th of January (a few days ago) in broad daylight in Lagos State. The robbers according to witnesses were robbing from vehicles stuck in traffic. Another doctor. Another loss. I tweeted this after reading the tribute:

Two doctors dead. That translates to reduced personnel and results in more waiting time, more rushed consultations, more expensive hospital visits, and ultimately, less care for patients in hospitals or health care centers. And that’s for the places that have health care centers.

Primary health care centers which should provide cost-effective, affordable, essential health services (maternal and child health, basic surgical procedures, etc) are comatose because they have been politicized, left in the hands of local government chairmen to build and equip. The result?

Where they exist, these centers are underfunded, ill-equipped, under/poorly staffed, and in a lot of cases, inaccessible thanks to bad roads, distance, inter communal clashes, etc. People undertake journeys that end up killing them in the name of getting to a hospital. There are 774 local government areas in Nigeria.

Back to the city. In 2010 I had a growth in the lower lid of my left eye, pushing a bit on the eyeball, and something that felt like a sheet of film on the eyeball itself. It itched, it burned, it hurt, plus my vision was hazy. A visit to a ‘highly recommended’ and expensive ophthalmologist in Abuja got me a ‘you need glasses’ prescription which I knew was wrong. I’d worn corrective lenses from my final year in secondary school till my 2nd/3rd year at University (there’s a wrong prescription story in here too) and so I knew the issue wasn’t glasses. Would the lens shrink the growth?

In Birmingham I was told it was a lesion, and after a lot of persuasion I went in for a procedure and it was taken out. Two years after, I don’t have any eye trouble, and I still don’t need glasses. There’s obviously an issue with capacity.

This is the fundamental reason medical tourism (seeking medical care abroad) is rising by the day in Nigeria; people have no faith  in the medical institutions any more. People would rather bankrupt themselves or defraud foreign governments just to access health care that can be available in their own country. The number of government officials who travel for ‘check ups’ don’t help the dwindling faith levels.

The two major fundraising campaigns on my blog in 2012 for Oke and Meka were for medical care in India. That’s feeding their revenue, and further shrinking ours. Why?

Everyone says they give aid to Nigeria; the US Ambassador to Nigeria Mr Terrence McCulley said the United States government has committed about $600 million to assist Nigeria’s health care services. That’s from one country, from about 2008 to 2013. Where does all this money go?

There’s the National Health Insurance Scheme (NHIS) which for the greater part fleeces Nigerians because a percentage of their wages services their membership yet they get the worst treatment at hospitals. They get cheaper brands of medicine, their waiting times are longer, staff treat them like they’re getting free services. No! They might not be paying cash but they get charged! And even if it was free? That’s beside claims that the NHIS has only benefited 10% of enrolls under the scheme.

The Nigerian Government needs to restore the health sector to the priority level that it is; not just another heading in the budget, and bottomless pit for receiving aid. It needs to depoliticize health reforms, and place it in the hands of medical personnel with competent project managers as supervisors. There needs to be continuity of reforms and projects, not hare-brained policies by every new government in power.

More importantly (and the most difficult), public officials should be stopped from receiving medical care abroad; that’s the only thing to incentive them to upgrade our facilities here.

A healthy nation is a wealthy nation. When people are sick, they cannot work. They cannot fend for themselves, and the choices to keep body and soul together these days are more negative than positive. Restoring Nigeria’s place among wealthy, economically thriving nations starts from ensuring her people are healthy.