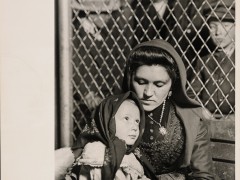 An immigrant mother in 1905. Despite their headscarves, Italians seem to have integrated well into America. (Photo by Lewis Hine, 1905 Courtesy of Preus Museum CC-BY 2.0)

A spectre is haunting Europe – the spectre of immigration. All the powers of the Old World have entered into a holy alliance to exorcise this spectre: President and Chancellor, LePen and Wilders, Norse Radicals and French burka-banners.

The western world has always had its ghost stories: strange, sinister Others, cloaked beneath veils (both literal and ideological) and ready to upset the local order through their eerie radical ways. Some times the frightening manifestation was the Sinister Spectre of Communism, at others it was ‘The Eternal Jew’. But as times (and realities) change, so do the demons haunting us. Today, we see that Other staring back at us once more, and it’s wearing a Niqab and stocking shelves at Tesco.

Two decades ago, this spectre was a fairy tale. I remember how, back in the 90s, a Dutch visitor to Romania scolded the country as a whole for our lack of understanding towards minorities and our lack of multiculturalism. Today, the same people that touted ‘multikulti’ are frowning at the ‘barbarian hordes’ assaulting Fortress Europe and refusing to integrate. Meanwhile, Romania still considers itself “not an immigration country” despite the growing numbers of Asian, African and Middle Eastern immigrants coming in each year and despite Romania’s official status as an Asylum Country in the UN circuit. Romania has even had its very first immigrant protest, a several months camp-out by Chinese labour immigrants dissatisfied with the outrageous work conditions  in Romania yet it still won’t consider a comprehensive approach to the issue. In the west the very opposite is true: migrants are being regulated more and more and legal migration avenues are being quickly bricked up with talk of ‘cultural incompatibilities’.  What authorities in Romania and elsewhere fail to understand is that while globalization has caused migration to intensify, it has done nothing to change its fundamental nature.

Think of the migrant as an economic entity. Immigration is (mostly) an economic process – it’s the transfer of the labour force from one economy into another where the potential to generate wealth is.  This is the case of Europe’s internal migration, with the EU opening up the borders for eastern Member State workers to strike it out in the west. The myth of the ‘Polish Plumber’ working for pennies is a social reaction to the EU’s free movement of labour, a side effect of the free movement of capital and goods.  This is also the case of much of Western Europe’s Muslim population. The ‘guest worker’ programs touted by countries like Germany or the Netherlands brought a lot of cheap, semi-skilled labour into those countries, labour that, following economic interests decided to stay and even re-unite with their families. You find the same guest workers, alongside their children and grandchildren in places like the now ‘infamous’ Sharia Triangle in the Hague.

This labour force integration doesn’t mean that migrants assimilate culturally as well, at least not at first. The relationship between the individual and the market is purely an economic one and while financial interaction benefits migrants and the economy, the more visible those migrants become the more likely they are to draw resentment from the majority. Immigrant neighbourhoods in the west today are just as segregated as they used to be a century ago in the great melting pots of New York or London. The only real difference is attitude and media exposure. The ‘ghost stories’ of the past were shared around campfires or bars. Today, they’re on the Internet and on television 24/7. Take the tragic example of the Woolwich attack. A century ago this would have been a simple story of a mad, murderous migrant, a singular case. Today, it is an international scandal.

When Marx wrote the Communist Manifesto he was certain that a great class upheaval was just around the corner. That upheaval never came, social changes and scientific advances improved the life of the beleaguered proletariat and made sure the ‘spectre’ was stillborn in the West. Where the state was weak and oppressive, however, Communism took seed and the Utopian dream quickly turned into a nightmare. Destructive Immigration is, today nothing more than a ghost story perpetuated by prejudiced minds and pay-per-click journalists. Sensible, unprejudiced approaches towards immigration and integration will ensure that those ghosts stay in their stories and never come back to haunt us.