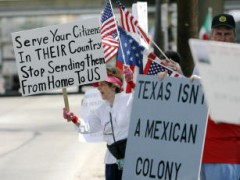 For many in the West, particularly Americans, remittances play a relatively inconsequential role in their daily routine.  This is somewhat unsurprising given the fact that in the overall context of developed “host” countries’ economies, remittances generally make up a rather small portion. For instance, the United States was the leading remittance-sender in 2009, remitting a total of $48.3 billion. However, this was clearly dwarfed by the United States’ GDP of $14,119.0 billion.

Nonetheless, as developed countries go through enormous economic turmoil and the prominence of remittance flows continues to increase – remittances have nearly tripled over the past decade – the practice has become increasingly caught up in a complex web of domestic politics in host countries.

One of the primary sentiments of some developed country citizens is anger at the “loss” of money to foreign nationals. The argument is relatively simple and closely interwoven with both trade and immigration policy debates. These generally nativist perspectives argue that the outflow of domestic currency has severe negative implications for the host country. Like imports, remittances result in expenditures on foreign products and services that would have otherwise been spent on domestic industries. As the argument goes, this undermines the economic position of the domestic country by supporting foreign firms at the expense of domestic ones and thus can result in significant unemployment as domestic firms are forced to shed labor.

While the economics behind this issue are considerably more complicated than this proffered analysis presents, the fact that this sentiment exists and is growing has profound political economy implications. The popular psychology of this type of economic argument, also seen in both labor and trade related debates, can have weighty repercussions for politicians and national policies. In particular, this perspective frequently has high spillover effects on the immigration debate. It can spawn a significant anti-immigrant position, particularly among the more nationalist parts of a country’s population. Consequently, domestic labor often finds itself pitted against immigrants, fighting to keep them out of their country.

This jingoist trend has been complicated by a largely symbolic aspect of remittances.  Remittances serve as a direct tie, an anchor for many, to an immigrant’s home country. This breeds the aura that immigrants are more closely linked if not outright loyal to their native lands rather than their host country. For many, sending weekly or monthly checks home to parents, siblings, grandparents, and cousins can become emblematic for a failure to assimilate. As the rampant secularism sweeping across Europe, from French burqa bans to German attacks on multiculturalism, indicates, host nations are increasingly demanding full integration into their societies. Any taint of “disloyal” sentiment often leads to considerable popular backlash.

Whether these sentiments are well-founded or not, they are undoubtedly playing an increasingly significant role in the domestic politics of these host countries. For example, a recent posting on the World Bank’s People Move blog, presented the argument that many host countries are particularly worried about guest worker programs because of fears that remittance levels will be higher with temporary workers than with more long-term immigrants. While migrant labor is often accepted as necessary for developed economies, the level of remittance flows has become a contentious issue on how to structure immigration policies.

Remittances are obviously only a piece of a much larger quarrel between immigrants and citizens of their host countries. While currently there appears to be little direct research on or evidence of pernicious economic harm from outward remittances, these monetary flows have a commanding hold on the political economy in many developed countries. At a minimum they are increasingly playing a symbolic role for underlying social and economic angst. If governments and politicians are not careful, rhetoric may have the power to lead to increased strife, inducing significant costs to domestic harmony. Further research needs to be conducted to accurately measure the costs of remittances to host countries – to either refute growing disquietude in domestic populations or to find ways to address a growing problem.