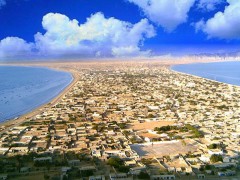 Unplanned is well planned, and planned is not planned at all.  At least that’s how things work in this part of the world. In history lessons we’ve seen countless occasions where plans were made and efforts invested, all to no true effect simply because the planners were too eager, too well planned. They say that when you become too set on an idea, you stop seeing the ground realities beyond it  – and that, fundamentally, is our problem.

450 years ago, we had the Mughal Emperor Akbar plan a new capital for India – for a sprawling Mughal Empire that spanned 4,500,000 square kilometers. 15 years in the making, Fathpur Sikri was deserted within only months of its completion. Yet the village adjacent to it still stands today. Why? Because every contingency had been planned for, and every arrangement made, except for what might actually happen. As it stood, the newly built city had no source of water, and the only water in the city was what was brought across countless miles on beasts of burden. Suffice it to say: A failure among failures.

Yet, where Akbar’s new capital failed, other cities still were born and took root – but only cities that were not expressly planned. Rawalpindi and Murree, for instance, started off as small garrisons and stopovers for travelers. Yet over time they have grown into bustling cities in the natural course of development. Murree is now a major local attraction while Rawalpindi is one of the country’s most strategically important cities, housing its top military brass.

Now it might seem from what I’ve said that we have learnt our lessons and become aware of our own shortcomings – maybe a reason behind the fact that the country’s capital was its only planned city in the half century since its inception. However, history always has a knack for finding ways of being forgotten, and having its mistakes repeated.

In 2002, the Pakistani government decided there was a pressing need for another port city to lessen the strain of trade on Karachi. In their wisdom, and eagerness to kill one stone with two birds (sic), a far flung location with no history of commerce was picked, and it was picked in a province with a history of perceived victimization. And so the seaport of Gwadar was created from the small coastal village of Gwadar. Just as the country’s rulers had thought to make Karachi a key city for international air traffic and then failed, so too did they fail in their ambitions for Gwadar.

While the aim was to perform a record transformation from a fishing village to a bustling urban center of trade that would stagger the world through economic, infrastructural, and real estate changes and incentives, the seaport now stands as a dismal, deserted vestige of the city once meant to herald a new epoch of development for both the country and the region. With blame (1) (2) being freely allocated to any and all parties involved, there is no shortage of directions in which to point accusing fingers.

The PSA (Port of Singapore Authority) says that politics and vested interests are keeping Gwadar and PSA from becoming successful ventures. Politicians say politics is to blame; others say that it is in fact the military that is delaying further progress on Gwadar. Pakistanis with an aversion to Balochis say that it is in fact the poor Balochis who are to blame – a fact that the hardliners among the Baloch proudly own up to. But that’s not all: those with more interesting ideas place the blame on secret ‘hands’ and international players with vested interests in not letting Gwadar take off – looking with meaningful stares towards our Middle Eastern neighbours in the UAE, and to some of our more immediate ones.

People with nary (read: a little) a semblance of sense say that it was an ill-conceived and ill-planned project as well as a city. Of course, they are precisely the ones no one listens to. That may just be why they think they’re sensible. Regardless of these conflicting arguments and rumours – and the fact that almost everyone has an opinion on the matter, the author included, that they think is the gospel ‘truth’ – the fact remains that there are too many question marks hanging over Gwadar for it to be a real “New City” or even a seaport.

The helm of these problems is crowned with bad decisions. The region has little to no infrastructure support and is not even connected with the rest of the country’s trade centres, much less mainland Pakistan, CAS (Central Asian States) or China. There is no rail or road network. Add Pakistan’s poverty to this fray, which means that we have little to no money to keep up or provide the intensive and extensive monetary and infrastructural investment that Gwadar requires.

To put sugared cream on the cake how about the fact that these questions are only being asked now or the fact that there was someone, somewhere, up there, sitting in the echelons of power – free of all accountability – that approved all this without making any informed decisions, for politically motivated reasons, pocketing a few million rupees for the ruination of what could potentially have become a national asset. There is of course the icing too that must be sprinkled here and there, and this comes in the form of the federation’s continued exclusion of the Balochis themselves – traditionally treated as second class citizens in the country – from the entire process. The results of this pop up on the local news every few days in the latest happenings of Baloch insurgency movements. Interestingly, these too, by the way, are ‘attributed’ to direct foreign involvement and financing (1) (2).

There is, of course, a cherry to top out what has by now become a veritable crème gâteau: China has committed to take over the operations of the port once the current contract for its operation is up. This time, the move finally eliciting an international response with our neighbours and other ‘allies’ expressing ‘security concerns’ about the venture which eventually resulted in the Chinese government expressly stating that all it intended was to operate a trade port in Pakistan.

So far this has been a long drawn out, maybe even a useless, case study. But its purpose is to state the obvious: Present day Pakistan is not fit for a ‘New City’ anymore even in the conventional sense of the word. Our only recent effort at such development has been shown up as a dismal failure. Not only have we stirred up international controversy, we have also further alienated the very people of the region, while showing an astute lack of administrative prowess and an astute skill in corruption – displaying a lack of governance (sic), spending billions of tax payers blood-money, and raising national ire while endangering national sovereignty on all fronts.

There’s no telling, this might just be the case with any ‘New Cities’ we plan. We’re just unfit; it isn’t cynicism; it’s the nature of the beast.

A perennial student, I'm always exploring, and though the journey isn't always pleasant, you come out a better person in the end - an outspoken writer by passion, an architectural design student by profession.