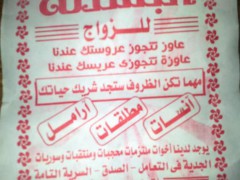 It’s two years now since the Syrian people first took to the streets to protest against the dictatorial iron fist of Bashar Al-Assad. His blood-thirsty repression has left countless injured and dead while more than a million people have fled the country seeking a safer and better life for themselves and their families.

I want to talk here about Syrian refugees and more particularly about women refugees and their daily nightmare. Of course, I could lambast the criminality of  international political sluggishness or argue there is still hope for this beautiful country and its people. But others have done high-voltage political analysis before me and I don’t feel any need to dress up in words my gut instinct that the days of the foul Bashar dictatorship are numbered.

Despite all my keenness, it has taken me months to write this piece. It is not a topic you can address from a distance, and however nonchalant I may be in everyday life, nonchalance is no help when it comes to facing such life stories. Yet despite the unbearable sense of powerlessness I feel, these stories have to be told because patriarchal societies — and I am not targeting solely the patriarchal societies of the Middle East — are fast to condemn and permanently stigmatise women victims of violence simply because their suffering is not seen as equal to men’s. And if we keep silent, this will never change.

Thousands of Syrians have fled to neighbouring Jordan, where they are crowded into camps and struggle in an everyday battle against difficult material conditions and poor healthcare. Security simply does not exist in these camps, which means that physical assaults and rape are a regular occurence, with children as young as 9 being the targets of sexual aggression. Forced marriages are another type of widespread abuse as Syrian women refugees are considered cheap brides, and campaigns to marry them to Syrian or other Arab nationals have gone viral. Such unions are sold under the pretext of protecting women’s virtue at any price, and the arrangements are made through all kinds of channels from social media, and online forums to dedicated secret bureaux for “honour marriages” that span the whole region.

This is not an unprecedented situation: I remember when I was a kid during the Bosnian war how Muslim women also fled to Egypt and other countries in the region. The same ‘save-their-honour’ campaign happened when a sheikh called for local men to marry Bosnian women and girls who had been sexually abused during the war. Similar campaigns have spread that focused on Chechens and Iraqis, and in every case such marriages have led to exploitation and further stigmatization.

The brutality of life away from home

This is an advert from Egypt: “You want to get married? We put you in touch with mademoiselles, hijabis, niqabis and Syrians”. Image circulated on Twitter

How bad is it for women and children in these camps? Extremely bad:

Three girls in our camp were kidnapped. Their kidnappers raped them. Then they brought them back to the camp. Jordanian guys come to harass Syrian girls from the age of six or seven.

You need to pee at night? Forget it:

There is no security, it is very dark at night. I come with my daughter, she enters and I stand [outside] waiting for her. There are girls that won’t go to the toilet. And even me, a married woman, I don’t dare to go to the toilet alone. We hold on and wait til the morning comes.

Who are the prospective grooms? Jordanians, Saudis or other Gulf State nationals who offer money to tremendously vulnerable people in acute need not just of cash and basic supplies, but also of protection. They marry Syrian women refugees hoping for shelter… for a few months or even less. In the politically correct jargon, the marriage is one ‘of convenience’: actually it is merely for sex.

Criminal hypocrisy goes even further when some men come with fake marriage permits from local sheikhs. Sheikhs have also been reported to sign marriage certificates for girls under the legal marriage age, for a small fee. The marriage gives moral justification to all those men who desire fresh meat in their bed for a while. Local authorities are of course aware of this institutionalized and religiously sanctioned prostitution but do nothing to change the horrendous status quo.

Getting married: a business transaction

In Egypt, where hundreds of thousands of Syrians have found refuge, women and girls also face the hardships of poverty, assault and exploitation that lurk behind marriage. Such unions are facilitated by drastically reduced ‘dowries’ (the money a groom needs to pay for his bride), and often enough candidates offer their brides-to-be no assurances about a better life after marriage. The dire economic crisis Egypt is going through at the moment makes men even keener to grab a bargain discount bride.

Marrying a Syrian woman refugee is clearly seen by many men – wealthy or otherwise – as a pure business transaction rather than a question of exploitation. Men have stated in online surveys that “it is a question of supply and demand,”  and the price of doweries plummets as more and more Syrians arrive in refugee camps. Fathers are harassed on a regular daily basis to give up their daughters for marriage and the ‘generous’ offers they receive range from 100 to 320 euros. Pleasure-seeking rich men sometimes as old as 70 unscrupulously multiply these speedy, cheap and condition-free unions preying on women and children sometimes as young as 12.

These bleak times can also push parents to marry off their daughters in an attempt to offer them a somewhat better life. Such precipitated marriages are leading to an increase in child marriages: although illegal in both Jordan and Syria, a huge number of unions have been reported where the bride is only 13 or 14 years old. Women themselves may agree to sacrifice themselves in marriages or prostitution.or be persuaded to do so by their relatives.  Finally, the victims can also become the persecutors as such an unbearable situation pushes other women to become pimps… If the women consistently refuse to marry, they may suffer severe retaliation: blackmail, having their tent in the camp burnt down or worse.

Sentencing refugees to shame: forsaken by all?

To help me out, I turned to friends whom I know are aware of the situation: friends, both men and women, I have talked to about the situation over the last few months, friends I have heard reporting with trembling voices how they witnessed an altercation between a Syrian refugee father and an ill-timed prospective groom, friends who take part in campaigns like “Refugees … not captives” (Arabic)… And I asked them all one simple question: “What do you think of Syrian women refugees becoming cheap brides, in countries where they are struggling to find shelter from Assad’s violence and trying to build a life for themselves against all the odds?”

So imagine my surprise to see all the “no, I don’t want to answer such a question” come pouring into my inbox. These people whom I considered as firm defenders of all those who suffer injustice turned out to be cowards. In fact, the majority of the men and women I asked declined to answer because “they have never thought of marrying a Syrian” (WTF?) or they disingenuously claimed the ‘this-is-a-sensitive-issue’ pretext. What does ‘sensitive’ mean? Should we censor ourselves and sentence these women not just to everyday violence but also to silence? This is plain cowardice, and I did lose friends over this issue, but feel more at peace with myself than I would have if I had merely accepted their pusillanimous stance.

Happily there are others who remain vigilant about injustice wherever it happens. A female friend of mine said that a woman is “not a property that needs to be protected by a man,” and went on to say that for a man to “suggest such a thing can only mean that he simply wants a woman to sleep with. Last but not least, it shows that women are not viewed as human beings who are capable of achieving anything they want.” A male friend shared: “I’ve heard of sick stories of men using this to marry Syrian girls in temporary marriages and other shameful things of the kind … things which I think are neither in Islam nor in humanity.” He highlighted the need to provide Syrian refugees with ways of making a living even if it was work they were overqualified for: “I wish they [governments and refugee organizations] would provide them [the refugees] with the means of making a living according to their qualifications, or even something like cooking or selling things or whatever.”

The road is treacherous, but the spirit is free.

I can find no better words to end this taxing account than what a dear friend, who is himself a refugee, wrote me: “Whether they are single or married, women have the same rights as men and deserve the same kind of respect as men. To think that for a Syrian woman somehow starting a new life or being accepted in a new society requires her to marry is an assault on her dignity and self-respect.”