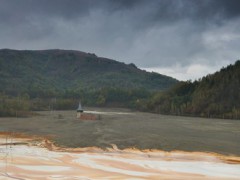 These past  days Romania’s little corner of the Internet has been all astir : lines have been drawn in the sand and crossed, war drums  beaten and in a very uncharacteristic move, Romanians have  once more taken to the streets. The reason? A controversial gold mining project has recently been approved by the government. The law still has to go through parliament but the appalling wording of the bill and potentially catastrophic eco-implications of the project have united a motley crew of NGOs and public figures who have staged massive protests bringing in thousands of people in cities across Romania and Europe, and who plan to stage even more in the upcoming weeks. The project’s defenders claim that it is an environmentally safe, financially sound business enterprise that Romania has a lot to gain from. A ‘Golden Opportunity’ if you will. But unfortunately, through the gold is there, the opportunity has vanished under a mass of loopholes, corruption and backroom dealings.

The first day of protests in Bucharest drew in almost four thousand protesters. Five thousand joined them in Cluj and several thousands in other cities throughout Romania and Europe. Photo by Sergiu Mihaescu – used with Permission

Similar protests have been organised against shale-gas exploration (‘fracking’), another ‘hot topic’ that appears to unite dissonant voices. It seems that, even if Romanians are passive and acquiescent in matters of governance, the issue of natural resources gets them all riled up.

The Protests in Bucharest have been continuing for three nights and appear to be going strong. photo by Sergiu Mihaescu – used with permission

Of course, articles like this scaremongering piece help instil a climate of fear and mistrust, and the always popular ‘corporations are bad’ slogan tends to resonate with a wide array of people, from hip leftist urbanites and country-first nationalists to Orthodox clergymen. Not to mention that the current leftist Prime Minister came to power amidst a flurry of promises to renegotiate, if not downright cancel, the toxic mining project. So far Romania has gained very little from these negotiations, just a minor increase in its project share, while the mining company has won the dubious authority to expropriate landowners who don’t  agree to sell their land and only has to offer ecological guarantees for the duration of the project and one year after.

The protest has drawn in people from all walks of life, gathering in the evening, after work. It’s a rare moment of Romanian civic disobedience. Photo by Catalin Georgescu – used with permission

This doesn’t mean that Romania doesn’t need to exploit natural resources or that this should be done solely by the state. There’s no doubt that private enterprise could do the job, cheaper, better and probably in a more responsible manner. In fact it did just that throughout the ante- and interbellum years,  making Romania one of the largest oil producers in the world. At the same time Romania was the second gold producer in Europe, after Sweden. There is a longstanding tradition of resources being exploited by private enterprise and the state’s only job should be to ensure that exploration and exploitation is done fairly, sustainably and, most importantly, safely. But for such an approach to be feasible, the project has to be credible, the contract fair and rock-solid and, most critically,  fully transparent. Yet most of the current contract’s provisions have been classified as state secrets and sequestered from public scrutiny.

“Silence is Golden” Photo by Catalin Georgescu – used with permission

Perhaps the worst thing about the current situation is that it has a precedent. In 2000 a cyanide spill from a gold processing pond caused the Baia mare disaster which killed 700 km of river ecosystem in three countries and was called the biggest European ecological disaster since Tschernobyl. The recipe for this disaster seems familiar: an off-shore company with promises of ‘eco-friendly’ processing technology, shady contractors who cut corners in order to cut costs and lax government oversight. The difference? The cyanide pond projected for Rosia Montana is a staggering 2500 times bigger. Twelve times bigger, in fact than all the other cyanide ponds on the entire continent.

The now defunct Rosia Poieni mine is a grim reminder of how Rosia Montana might look one day albeit on a far larger scale. Photo by Gyavol Roland CC BY NC ND

Romania needs the revenues from the Rosia Montana gold yields and it desperately needs the energy independence afforded by shale gas. But it also needs responsibility and accountability and that is something that under present provisions neither the government nor the companies involved can guarantee. So, above all Romania needs new laws, stricter oversight, true market competition and no let up in the level of present public pressure. Because while growth in these troubled economic times seems essential and governments are quick to approve any potential source of revenue ‘golden opportunities’ at best are often only gilded and what lurks beneath the thin veneer of gilt is the lethal pallor of cyanide.