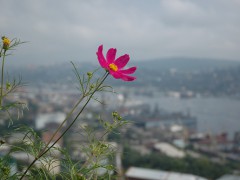 Ulrike Reinhard’s article compares democracies to authoritarian regimes and the ways these political models address environmental issues. But what about a country that is neither a democracy nor a 100% authoritarian state?

Failed democracies like Russia have a high level of corruption that creates situations in which the authorities turn a blind eye to industrial violations of environmental standards.

A Flower with a panorama of Vladivostok in the background. Photo by Jason Rogers

The basics of ecological policies in Russia are regulated by various pieces of legislation. The then President Putin even addressed these issues in his 2007 speech to the nation and the Federal Assembly. Four years later and resources are still not being effectively consumed, and there is still a lack of recycling facilities even though Russian cities are drowning in litter.

The industrial heritage of the USSR only adds to the complexity: cities and villages with only one mammoth enterprise, still the biggest employer, contribute further to the environmental puzzle. It’s more practical (and politically safe!) to keep the non-eco-friendly factory running than leaving the whole city unemployed and facing the problem of creating thousands of new jobs. It’s easier for factories and enterprises to pay fines for violations of the environment and their waste than to stick to thr rulebook.

The role of the state: sweeping statements or real change?

Russia is too vast a land for us to reflect all the changes in ecology in a single article, so let’s just look at one particular region: Primorsky Krai. This is the most southern part of the Russian Far East with access to the Sea of Japan.  This territory is known for its unique ecosystem, climate and variety of wild animals. The local forest – or taiga – is home to the Ussuri tiger and many other unique species. Yet despite all the noble sentiments and expressions of intent to improve the situation, real changes for the better are hardly noticeable.

The Primorsky Krai region is beset by poachers who kill animals and companies who illegally cut down the woods. In the first five months of 2010 losses amounted 850 million rubles (about 27 million USD). As the WWF has pointed out, the widespread presence of Chinese dealers in conjunction with the low income of the rural population and the high prices paid for the raw animal and plant materials used in traditional Chinese and Japanese medicine have contributed to the rash of poaching. The situation gets worse by the year while local and central governments are unable to achieve any positive change.

The response of civil society

The hybrid nature of the Russian political system, however, means  that at least one actor is ready to address environmental issues: where the government fails, civil society steps in and provides an alternative.

With modern technologies people are able to organize events and help each other. Bloggers constantly organize events to clean local beaches and fortresses from litter. Internet activists participated in several national events, such as “Bloggers Against the Litter” and “No More Rubbish,” and  cleaned up several bays, picked up trash from the summit and base of Pidan Mountain and other locations, and put up posters about environmental issues. School students are also attracted to these kinds of events and help clean up the environment.

The residents of the Pozharsky area are trying to protect the biggest cedar-broadleaf forest in the world from logging. Activists call for a stop to the long-term leasing of the territory in the valley of the River Bikino by the Les Export timber company.

All these examples of activism show that civil society in Primorsky Krai has the  potential to improve the ecological situation. Local bloggers have also been known for their activities in exposing breaches in the construction of certain state facilities that pose a threat to the environment. Activists and government exchange information and are able to reach a consensus.

So far, civil society activists have not been able to prevent power plants from polluting the air, nor could they force them to install water treatment facilities. But they are able to change things for the better by cleaning up the bays and protesting against deforestation. The more people share this understanding, the bigger the change that can be achieved.

Unless the Russian government takes account of the existing problem and attracts investment to tackle it (as happens in authoritarian China), citizens in Russia will only have themselves to rely on.