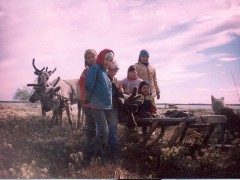 Reindeer and children by ugraland on Flickr (CC BY 2.0)

Russia is cursed with its resources: the oil and gas industry is growing so fast that 50% of the federal budget and three quarters of exports depend on its production. It seems that the country does not produce anything, but just relies on its natural resources.  At the same time careless oil drilling methods are destroying the flora and fauna of the Arctic and affecting the lives of the indigenous population as both oil giants and government turn a blind eye to environmental disasters.

Many indigenous groups in Russia suffer from their uneasy co-existence with oil corporations. They want to stop oil exploration in the Arctic and are calling for legislators to acknowledge and secure their land rights but are thwarted in their attempts by a lack of information, skills and funding. Even though Russian laws are supposed to set [ru] priorities for indigenous communities in land rent auctions, it’s the oil companies which always win.

The northern territories of Siberia have belonged to nomads for centuries. No one was interested in settling these lands beforehand because of their harsh climate and limited agricultural options. Unfortunately everything changed after the discovery of vast oil reservoirs in the Arctic. Indigenous communities had to share their lands with corporations that jeopardize their very means of survival: reindeer farming, ground grazing, fishing and hunting.  Nomads can no longer exercise their traditional activities as the spreading ecological disaster forces them to leave their lands in search of cleaner places.

Greenpeace points out that reckless oil production and poor maintenance of oil pipes causes spillage of more than 30 million barrels per year. This is seven times more than the Deepwater Horizon oil spill in the Gulf of Mexico. The tragedy in the Gulf of Mexico attracted a lot of international media coverage, yet the massive oil spills in the Arctic are largely ignored by mainstream Russian and international media while oil giants carefully avoid drawing any attention to them.

This land-based oil spillage destroys the soil and ecosystem of rivers and lakes and also affects the Arctic Ocean. Fish have died out in contaminated rivers and reindeers cannot feed on contaminated fields.

Before the oil corporations start drilling, they spend a lot of money on advertising campaigns to create a positive image of the oil benefits for the region. Yet in reality, the local population does not benefit much from the oil industry. Most of the tax revenues go to Moscow and then get redistributed [ru] among the regions. Consequently, regions rich in mineral resources can barely cover their expenses. Oil giants are not interested in investing and developing the regional infrastructure; they are short-sighted and geared to disposable income. They do not see the bigger picture and don’t even renew worn-out pipes. Furthermore, not many locals are employed in the industry as they lack the necessary education and expertise. Jobless and deprived of traditional activities, many nomads turn to drink and alcoholism is endemic among indigenous communities.

Nomads are slowly losing the battle. They are not only losing their land, but their cultural heritage, their languages and traditions as well. It is clear that oil dependency is a zero-sum game for Russian society and its economy, as the country does not produce anything but merely devastates its natural environment. What do you think can be done to save the country’s cultural heritage and its ecosystems? Are there any ways to survive doing battle with a big corporation?