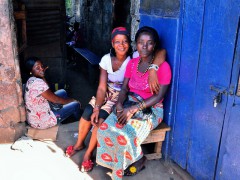 When the Future Challenges Team put out a call for local views on International Women’s Day, I thought long and hard. The first issues that came to mind were African women’s access to land, food security and poverty reduction- all related, especially within the contexts of governance and development.

My mind wandered to the West African nation, Sierra Leone, where women, who bore the brunt of the ravages of war, played a central role in post-civil war reconciliation and recovery, but cannot own land in the nation they helped rebuild.

Women constitute 60-80 percent of Sierra Leone’s agricultural workforce, yet they do not have the legal right to own titles or property. Following a three day national conference (funded by UNDP and EU, implemented by COOPI, oxfam, FAWE and SLYEO) on women’s rights to land and access to justice in Sierra Leone’s capital (Freetown), a boycott of the upcoming November 2012 presidential and general elections was launched.

The boycott will go forward if the government does not pass a law granting women’s rights to own land.The 2007 Devolution of Estates Act provides rights to private individual property, but does not confer the same rights and protections to most rural women in Sierra Leone, who live and work on family, chieftaincy or community lands. Sierra Leonean women continue to have insecure land tenure, and this insecurity further exacerbates their vulnerability to poverty, as land is central to many women’s participation in the market.

This boycott is especially salient in light of land deals (or land grabs) that total over 18 percent of Sierra Leone’s arable land. According to Sierra Leonean NGO Green Scenery, these land deals involve an estimated 20 large-scale investors and approximately one million hectares have leased out for year terms (with some contracts allowing for 21-year extensions). When the majority of smallholder and subsistence farmers are women, it is increasingly important for them to have a seat at the table.

Overall, this highlights the need to center gender in global and local discussions of land rights, land reform and food security within development and governance.

It is not enough to have women sitting in parliament, but women’s participation in politics on the ground. In this case, politicized non-participation in elections to call for land rights may just be what Sierra Leone’s women need to do to leverage their clout for legislative land reform.