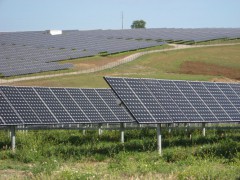 In terms of its technology, I have no worries about Slovakia’s ability to sustain growth when compared to other countries.  If the West has been able to achieve its present level of development, then we can reach it too.

If Westerners continue to have enough energy to maintain their standard of living, we can follow them. Only recently there has been quite a bit of turmoil around this issue.

For decades Slovaks have been used to foreign – namely Russian! – sources of oil, gas and uranium.

Thanks to extensive development of the gas pipeline network during the socialist era, most households now have easy access to pipeline gas.

Extensive use of gas has also had a positive influence on our environment: gas is not just less dirty than traditional wood and coal, which means cleaner air, but its use as a heating fuel instead of wood has decreased the level of deforestation in Slovakia.

It looks likely that in future it will still be more affordable to continue burning fossil fuels. When it will be reasonable to switch to something more efficient, the world will do it. And Slovakia will follow suit.

Slovakia’s heating systems and transportation mainly rely on burning fossil fuels. But most of our electricity production – a whopping 54% – comes from nuclear plants.

Now you’ve  probably heard about Germany’s decision to cut back on its use of nuclear energy.

Strictly anti-nuclear Austria has also decided to halt imports of nuclear energy by 2015.

Yet on the other hand, Slovakia is trying to increase production in its nuclear plants. But increased production will come later than was originally planned. Because of initial lack of public participation in the procedure for extending one of the two Slovak nuclear plants – Greenpeace is just one NGO that wants to have a say in this – the procedure has to be restarted. And why not? After all, it can bring much more safety.

Anyway, today it is not nuclear energy which is hiking up the price of Slovak electricity. Yes, we subsidize the rest of the Slovak coal mining industry, saving about 600 jobs (and destroying the lungs of miners), but this is not the main point.

Slovaks are paying higher energy prices mainly because of the subsidies given to “renewable” sources of energy, especially solar energy.

If the situation in Northern Africa remains stable, the European plan for a big Saharan solar energy grid could one day supply us as well. At least I hope so, because solar energy in its present form is still not suitable for the weather conditions prevailing in Slovakia.

In my opinion, it is nonsense to cover green meadows with dark panels all in the name of environmental protection.

Today we found that we were too zealous in handing out solar subsidies. Because of this small portion of Slovak electricity production (solar energy makes up just about 2%) the overall price, including distribution fees in which subsidies are incorporated, of electric energy for companies is too high.  In the EU electricity price listing we’re rated behind leading European island states (Cyprus, Malta and Ireland) which depend heavily on burning of oil (Ireland on burning gas).

Solar subsidies are also the reason for the closure of a new modern gas power plant which started production in 2011.

Thanks to subsidies (and fraud!) sunny Southern Europe produced some “solar” energy accidentally also during night (Source: The Ecologist)

Paradoxically, Brussels is pushing EU members to the new energies, while also criticizing us for excessively high electricity prices which are hurting the economy. (See also the case of the Slovak producer USS mentioned in an earlier article on FutureChallenges).

In the meantime, the EU requirement to increase our ratio of renewable energies from the present 11-12% to 14% by 2020 remains in force.

I don’t know how we will fulfill requirement of 14% renewable energy, especially when the ratio of our nuclear production is set to increase. But maybe it does not matter because in the EU, showing your good will is often enough. However, given our sluggish growth rate, and the (un)employment that goes with it, the actual efforts we’re putting into greening our economies  – achieving 12% of renewable energies in total production thanks to high subsidies and prices  – do not look very sustainable.