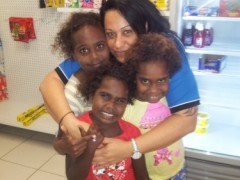 Cairns is a paradise: lush, green and tropical; yet up to 1500 sleep rough or homeless each night, many of them indigenous. Homelessness is but one of the challenges indigenous people in Australia face; another is unemployment due to systemic challenges such as discrimination and poorer health and literacy outcomes.

So when I heard of an initiative run by my local church to provide monthly barbeques at Three Sista’s, a local transitional and crisis accommodation service with predominantly indigenous tenants, I was eager to join. I was pleasantly surprised to discover that Three Sista’s not only provides transitional and crisis accommodation support, but is also embedded in a social enterprise model including community services and indigenous enterprise. Current economic models, such as “trickle down economics” and Australia’s own welfare systems are apparently failing to meet the needs of the most disadvantaged, including indigenous communities and the homeless. Yet as Three Sista’s demonstrates, social enterprises do have the potential to address these gaps from a socially aware and culturally sensitive point of view, leading to more holistic development outcomes, including financial, social and emotional well-being, cultural identity, and a sense of belonging.

In recent years, there has been a growing interest by policymakers and social investors in the important contribution social enterprise makes to Australia’s society and economy. Social enterprises are organisations (profit or not-for-profit) that exist for public or community benefit and trade to fulfill their mission. They are created to foster social and economic inclusion, address gaps in service provision, and provide new solutions to address social, environmental and economic challenges. A recent study by the Queensland University of Technology (QUT) in partnership with Social Traders tallies with the findings of the Giving Australia project (Department of Families and Community Services, 2005) in estimating that there are up to 20 000 social enterprises in Australia. Indeed, with federal, state and municipal funding becoming increasingly competitive due to austerity measures, many NGOs are turning to social enterprise in order to supplement their income and maintain their financial sustainability.

Three Sista’s Pty Ltd was created by social entrepreneurs Janet Guthrie and Stuart Wright in 2012 as a social enterprise dedicated to providing affordable transitional/crisis accommodation. A business loan was provided by SEFA, one of the first financial services company in Australia focused on social impact lending. In 2011, SEFA was selected for funding by the Australian Government’s Department of Education, Employment and Workplace Relations (DEEWR)’s Social Enterprise Development and Investment Fund (SEDIF). Government funding of $10 million was subsequently matched by a further $10 million received from a consortium of equity investors and lenders.

In mid 2012, Three Sista’s took over the management of 68 low-rent units, some in disrepair or uninhabitable, transforming the run-down complex into a social accommodation enterprise model with an integrated support strategy. By collaborating with a range of private, public and non-government services including Apunipima Cape York Health Council, Wuchopperen Health Service, Queensland Health and Shelter Housing Action Cairns (SHAC), Three Sista’s goes well beyond just a ‘bricks and mortar’ homeless shelter. They provide a safe, caring environment that connects tenants with the right services and a pathway to re-engage with the community, to transition into long-term sustainable housing and to build a better life.

According to Stuart Wright, the managing director, there is a misconception that families dependent on welfare can only afford public housing. He works with tenants to challenge this mentality so that with good budgeting skills they can successfully enter and remain in the private rental market. Another area that indigenous people often struggle with is employment due to systemic barriers such as discrimination and poorer literacy. However, as examined in one of my previous blog posts mainstream employment services such as Job Services Australia are often inappropriate, inadequate or insensitive to the needs of indigenous job seekers. As such, Three Sista’s helps to address this gap by supporting and training tenants to participate in a range of indigenous social enterprises, including landscaping and horticulture, property maintenance, carpentry, painting and hospitality.

Already, there are some inspiring testimonies. Mark*, for instance, is a single father of two boys who was a long term resident of the complex that Three Sista’s took over. Mark is a highly skilled individual who fell into the homelessness cycle due to a range of issues that impacted on his social, financial and emotional well-being.  Mark became the very first employee of Three Sista’s in 2012 and since being given this employment opportunity he has been able to move out of crisis accommodation, rent in the private market, purchase a car and improve his social, emotional and financial well-being.

Three Sista’s is a powerful example of the impact social enterprise can make to address gaps in service provision and help foster the social and economic inclusion of indigenous people. Real gains are already being made in reducing indigenous homelessness in the region. Good “development” is about more than just economic indicators such as GDP and PPP, it’s also about more intangible indicators such as a sense of community, belonging and self-worth; something that Three Sista’s does well to nurture. With the public welfare sector being constantly threatened by austerity measures and the failure of traditional models of economic growth to meet the needs of the most vulnerable, it is highly likely that social enterprises like Three Sista’s will continue to play a vital role in fostering socially inclusive economic development in Australia.

*Not his real name