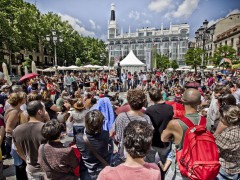 The 2008 financial collapse doubtlessly meant a turning point for Spain according to different perspectives. However, the most outstanding one could be the country’s political transformation shifting from its two-party system established since the 1978’s democratic transition with a decision-making process ruled by economic and political elites, to the highest level of civic participation ever.

“Young people, make politics, otherwise it will be done against you” –reads an excerpt taken from a 1937 interview to the Spanish poet Antonio Machado- .

The aforementioned sentence perfectly summarizes what is currently happening in the country.

In the wake of the Arab Spring, Icelandic financial crisis protests and the Greek opposition to austerity measures, simultaneous rallies took the streets of 50 Spanish cities on 2011 May 15th.

The demonstrators call themselves “Indignados” under the inspiration of the pamphlet Indignez-vous (Time for Outrage) written by Stephane Hessel the year before. This citizen outburst seemingly fresh had been brewing for a long time -previously to the 2008 crisis even- when many citizens foreboded the upcoming housing bubble burst since housing had become and out-of-reach good for many people – due to the 180% price rise from 1996 to 2006-, youngster specially.

Back in 2003,   the “Dignified Housing Platform was the first voice to give the alarm, labelling both housing bubble and speculation as a common future thread. In February 2009 one of the key elements in this new outlook, the Mortgage Victims Platform, was launched. Raising the voice of those who lost almost everything because of banks and financial sector ’s  greed, this association easily explained how deeply housing bubble and austerity measures are linked in an eight-minute video.

For the last four years the main goal was socializing bank’s losses while Spaniards were paying the bill. Before the loss of their lives’ quality standard, earning power and rights the citizens started to increasingly cry out in the streets, organizing themselves around 15-M local assemblies and topics (education, health, pensions…) in what they called “mareas” (tides).

The austerity mantra for which dismantling basic public services will prevent sovereign debt to increase is not working   in the Spanish case,   since the Debt-to-GDP ratio passed from 78% in 2011 to the current 94%.

As demonstrations’ rhythm and frequency increases, so does the government investment in anti-riot police’s equipment. While in 2004, the number of demos in Spain was around 10,000 in 2010, it increased up to 20,000.

The investment in the anti-riot equipment has not just rocketed but diversified by purchasing water cannons, helmets and protecting vests. In this scenario the government expenditure has grown from  €170,000 in 2012 to €3.2 million in 2013. Moreover, the Rajoy’s cabinet is going to spend €10 million more from here to 2016 -according to a paper for investors recently leaked- in order to face the massive autumn  protests concerning the expected 40bn euro budget cuts expected in the autumn.

Besides that the government is about to pass a very restrictive bill, the so-called “gag rule”, to crack protesters down by turning the right to demonstrate and free speech into a matter of disturbing the peace. Moreover, during the last four years , what the experts call “soft repression” –ticketing people with expensive fines- has picked up.

Domitila Vicente stands for an extreme case. Up to three times she was fined by the police for “breach of the peace” while she was protesting against Nova Caixa Galicia, one of the few Spanish banks which defrauded its savers. This is a blow-dropping event given the fact that she is 82 and walks using a medical cane.

In the turmoil that Spain is currently facing, many politicians debunked both protesters and social movements as “terrorists” or “nazis” even while they demanded them to  “run in the elections”.

Paying heed to this advice, Podemos –a party rose from a grassroots movement closely linked to 15-M protests with public university lecturers as its main figures- presented its list of candidates to the past European elections winning three seats and becoming the third political force in Spain.  This electoral success meant a straightforward challenge for the country’s bipartisanship, as this London School of Economics post highlights.

First of all, the country’s two-system party (People’s Party and The Socialist Workers Party) is exhausted. In the second place, the citizenship is clearly looking forward for a change.

In conclusion , it means the political crystallization of 15-M movement, showing that protests are really changing the world as social-movements -researcher Cristina Flesher points out.

Podemos , by showing no hierarchy and being inclusive disregarding the ideology , is considered to represent the shift from Realpolitik (politics or diplomacy based primarily on power and on practical and material factors and considerations, rather than explicit ideological notions or moral or ethical premises) to Common-good politics.

Besides that,   it embodies one of the 15M movement main characteristics: Thecnopolitics. It has been the first party in the world using Reddit as a political tool as well as a smartphone application (Appfree) to get in touch with its supporters and also to openly debate proposals.

After Podemos’ wake the citizenship lists running in the upcoming 2015 elections have spread all over Spain: Guanyem in Barcelona, Ganemos in Madrid, Seville, Málaga, Córdoba, Valladolid, Municipalia, Marea de Vigo… It seems to be clear that part of the society wants to bring institutions’ focus over  some key ideas on the foreground: sovereign debt audit, and open debate on basic income, solutions for evictions, the protection of public services and the end of austerity measures (aka austericide).

The ruling People’s Party, now panicked at the perspective of being defeated by these new parties, is planning to promote an electoral law amendment by its own.

This choice could turn into a double edge-weapon that could backfire, giving the Government unpleasant news, not to mention that it would infringe the Council of Europe’s recommendations on electoral laws.

The time window between now and the 2015 administrative elections could possibly open a new period of hope and change in the country.