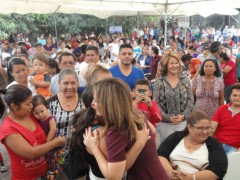 Women’s rights are more than pressing here in El Salvador, the nation with the highest rate of femicide in the world.

Yet changes are evident and increasingly popular. The current left-leaning government has opened five Ciudades Mujeres, or Women’s Cities, aimed at offering entrepreneurial and family support for women in a country where the female labor force participation is 47 percent, compared to 79 percent for men, according to the most recent UN data.

A recent surge in publicity campaigns run by UNICEF and the Salvadoran government denounce verbal and physical abuse of girls and women in a part of the world still wrestling with significant machismo.

As part of the International Women’s Day celebrations, Salvadoran First Lady Vanda Pignato visited the Lutheran Church of El Salvador, along with the Minister of Health Isabel Rodriguez.

Standing in the heat while talking to 600 in a church parking lot, the 91-year-old Minister of Health was hailed as a symbol of change in traditional El Salvador.

She has a medical degree, ran a university and became her country’s top doc.

Salvadoran Minister of Health Isabel Rodriguez, 91, takes questions from the press after a speech on International Women’s Day. Photo by Jamie Stark.

“A lot of people said, this is a position for a man,” Rodriguez said of her current job as the only woman in a 13-person cabinet of ministers. “Women can access all positions of power,” she continued. “If they are faithful to their convictions, to their people.”

First Lady Vanda Pignato, 51, is married to current president Mauricio Funes and also serves as the nation’s first Secretary of Social Inclusion. Pignato has been verbal about her disappointment that none of the major parties in this spring’s presidential elections nominated female candidates.

With her tan high heels pushing the petite leader skyward, Pignato warned that El Salvador cannot afford “falling backward, but needs to take steps forward.” Brazilian by birth, her message spoke to the character of women in El Salvador and across Latin America. “We women are pure love, pure love. I don’t know a woman who has created an atomic bomb.”

In a country with so much violence against women, her message from the heels of power resonates. She called for more diversity in government and leadership as a solution to stem violence and promote equality as a cultural value.

The First Lady’s words suggest that in a country entrenched in machismo, movement toward gender equality comes from the small yet deliberate steps of its female leaders.