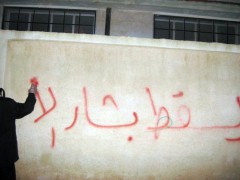 I have been looking to write on Syria for months now but have never found the right way to put everything I had in mind. Yet recently Robert Fisk wrote about questions asked him by a Syrian friend and it was there that I found the missing link – the link I had been looking for for many months. My previous attempts at writing failed because every time the pace of events outmanoeuvred me. A Syrian friend asked Fisk “suppose the Alawite Shia President Bashar decides to flee, he said. “He will be driven to the airport by an Alawite colonel. Will the colonel let him go? I doubt it.”

The situation has come to this point; it is unlike the Tunisian quick change or the Egyptian illusion branded as revolution. Tunisia’s Zein al Abedeen Bin Ali was the luckiest and smartest of all these victims of revolution fever. He had the time to fill his bags with dollars, get a plane and land safely without a single bruise. He even managed to visit the man who brought his decades old regime down.

In Syria the scenario is not as simple as it was in any other country involved in the recent so-called “spring uprisings”. Syria is a multiethnic, multicultural country with a very complicated past. It is a country where a minority rules the majority; of course you could also think about Bahrain but Bahrain is invisible for obvious reasons. The Alawite colonel Fisk’s friend is talking about is part of that ruling elite that manages and runs this country.

The important question he raised is if Assad goes what will happen to those who were part of his regime at all levels? How will the new setup treat the old guards of the Assad regime? People who view this situation closely based on historic perspective and real ground information have a completely different view, a view not based on some dodgy activists sitting God knows where but on those who are part and parcel of the treacherous and nasty game now being played out in Syria.

In cases such as Syria the change would be costly from every point of view. The genocide many are talking about would be nothing compared to the one that would follow should Assad move aside with his regime completely folded. How would the world act on that? Wouldn’t that make everyone party to the massacre of Alawites to bring democracy to Syria? On top of this, no one has a viable and safe plan for post-Assad Syria where all groups from different ethnicities could feel secure.

The politically motivated decisions taken after the First World War by diplomats like François Georges-Picot and Mark Sykes have already paid dividends stretching to decades of killing and unrest. How would the diplomats sitting in Washington and New York or Brussels for that matter guarantee security in the Syria of today? With Hizbollah sitting across the border in Lebanon and a restless Iran watching Bahrain being ignored and Syria being cornered, how do we expect that post-Assad Syria will be a joy ride for the conquerors of Libya?

On the other hand, the defections are sowing the seeds of a new regime that will be flawed right from the start, based on people whose moral authenticity will always be in doubt. Would you like me to believe that the Assad Prime Minister Riyad Hijab who defected has his hands clean of bloodshed? Or that he was unaware of what was going on in his regime, under his nose? The sense of accomplishment or achievement when a Syrian leader defects is beyond understanding to me. It also tells me that lessons have not been learned and it will be the same status quo beyond Assad that preceded his departure.

The million-dollar question is who in his right mind would drive or fly Assad out of Syria? Who would guarantee the safety and security of millions of Syrian Alawits? A new regime would definitely be made up of those who have been suppressed by the Assad loyalists and I sense the déjà vu of post Saddam Iraq. Another horrifying spectre I can see is that sending Assad packing would not be a one-off event. Are we not overlooking the simmering pots of Sunni and Shia nemesis in the region? With both sides endowed with enough natural resources to splurge out money till the last man is left standing. Why should we believe that the mullahs of Qoum, Tehran and Beirut would deliver on the prospects of peace with wisdom and sensibility? And why should we believe that with unrest in the offing in Saudi Arabia itself, Saudis would sit by idly and let their arch-enemies take a swipe at them?

Like Libya, Tunisia, and Egypt, all these battles will be supported by one type of Muslim funding the killing of another type of Muslim. The demise of one side would lead the other cap in hand to the threshold of financial institutions for loans to rebuild what they destroyed with funds provided by their dear friends. At the end of the day the same poverty, and deprivation of rights would continue in one way or another. Revolution or freedom would never dawn and the night of darkness would be prolonged indefinitely with Islam the religion of those on the battlefield, the killers, the murderers and their victims alike.

I am not a prophet or a visionary.  I am just an ordinary reader of history and it is my firm view that the next world war will be funded and fought by the Muslims of the world. Those who believe they should fear the so-called Muslim world of today need not worry as today Islam is in most danger from the very followers of its teachings who portray and interpret them in all the wrong ways.