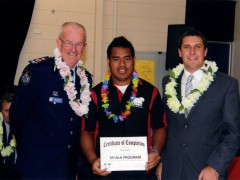 Despite popular opinion that Australia has been immune to the worst of the global financial crisis, it’s the stories you don’t hear about, that tell us the woes Australia’s economy is traversing. Both federal and state governments have implemented a variety of austerity policies in an effort to “bring the budget back to surplus.” Recently, fellow blogger Kate Morioka and I undertook a research project to map the scope of funding cuts on the coastal community of Deception Bay, north of Brisbane, and the stories we heard raise many concerns for the future of families in the Bay.

Since July 2012, the Queensland Government introduced funding cuts resulting in the termination of 14, 000 public sector jobs and a significant reduction to key social and welfare programs. Ironically, those worst affected are those most disadvantaged in our community: job seekers, the homeless, single parents, indigenous people and migrants.Of particular impact has been the loss of the highly successful Skilling Queenslanders for Work (SQW) employment program, which the state government claimed was a federal (and not state) government responsibility.

Deception Bay has been hit hard by funding cuts. A total of 20 local programs and services had been lost, reduced in funding and/or staff, or put on hold between July 2012 and 30 May 2013, including literacy programs, employment programs, and programs for indigenous people and migrants. One group that completely lost its funding was Pacific Youth Justice, which ran leadership and justice education programs for young people at risk of entering the juvenile justice system (see photo above). Furthermore, the funding cuts have resulted in the direct loss of 24 part time jobs in Deception Bay.  The strongest impacts stemmed from the axing of the SQW employment program. SQW was noteworthy for its individualised, holistic approach to job seekers, in contrast to the more systematic, standardised approach of national job search provider, Job Search Australia.

Mark* (name changed), a 22 year old Aboriginal man who grew up in Deception Bay, believes that participating in the SQW employment program through local NGO Deception Bay Community Youth Programs (DBCYP) has helped him gain the skills and confidence he needed to get back into the workforce. He has also been battling addiction to alcohol, and DBCYP provided him with the moral and emotional support he needed to overcome that. He had previously gone through JSA (Job Search Australia), but felt that DBCYP’s program was “like 100% better. At DBCYP you’re actually learning something, doing stuff. And you get a qualification out of it. Or some sort of help.”

Tui* (name changed), a 20 year old Pacific Islander who has also participated in SQW, felt the program helped him to get job ready, with Nationally Accredited training in sawing and drilling, which he is now using in his work as a builder. This corroborates testimonies of other former participants who felt that DBCYP had encouraged them to follow their skills and passions rather than just assisting them to find any work that was available.

According to Brooke Reynolds, Employment Coordinator at DBCYP, the loss of funding for SQW has had huge implications on the type of services available to job seekers in Deception Bay.

“Last year we had some issues around social discord between young Pacific Islanders and white boys, brawling in the streets and quite a lot of assaults. Because of our connections with those two groups we were able to come in and provide mediation and the violence stopped. Now that we don’t have (funding for) that kind of thing, those social issues will become a huge problem in the future, and I have no doubt we have seen an increase in crime.

We are seeing an increase of clients coming in and we are going to reach the point soon where we can’t meet the needs of everyone who comes in. The people we get referred to us now are more complex cases, more likely to be homeless, in crisis, and in drug and alcohol addiction. The needs are much greater than SQW but we’re doing it on less dollars, and I don’t know how sustainable it is.”

The concerns raised by Ms Reynolds confirmed those raised by Mark and Tui. According to Mark, “The crime rate will go up. People get bored, they need something to do. Usually it’s the wrong thing. They got no money, so they get into stealing, vandalising. And when they get money, they spend it in the wrong way.”

When asked what they perceived as the “strengths” or “assets” of the Deception Bay community, the residents’ replies weren’t very hopeful. Mark felt that there wasn’t a very strong sense of community, and that many of the young people came from broken homes, or some type of abuse (physical, domestic, substance). In Mark’s words, “There’s nothing else really that people can get help from. Some of them don’t go to school, I’d say most of them don’t go to school. So they’re just sitting at home, it’s a cycle.” Tui also felt there were not enough support services left for young people, especially Pacific Islanders, which is why most of his friends and family have since left the Bay. On the other hand, the sense of cooperation and collaboration evident between numerous community groups and services operating the community testified to the willingness of the community to stand together in the face of austerity measures.

These stories testify to the impact that State Government funding cuts have had on the wellbeing and opportunities available to residents in Deception Bay, particularly the long-term unemployed. Numerous programs and services have already been affected, while flow-on impacts are likely to include depression, crime, family breakdown and substance abuse.  It is clear the government must redirect funds to community and welfare services including adequate education and employment support, early intervention and prevention services for families, and community development. Otherwise, there will only be more deception for communities like Deception Bay. Denied the support and services they deserve, in the long-run their delicate social fabric will require even more time and resources to repair. My hope is that the government will prevent further disintegration and invest in our communities now!