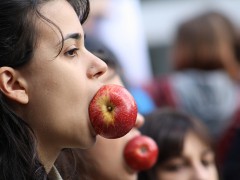 ‘Sanskaar’ (morals as embellishments of family honor) and  ‘paramparaa’ (traditions) are heavy words bandied about frequently on Indian television mainstream soaps, often by the matriarch of the  family in the series. The consistent message advocated in these series is about how a woman’s worth is closely linked to her ability to uphold the virtues of ‘sanskaar’ and ‘paramparaa’. The basis of such values is translated in everyday life through concepts such as ‘shame’, ‘purity’, ‘decency’ and so on.

These are all yardsticks that define how much of woman’s skin is to be covered, how feminine she must appear and act, how her focus should never waver too far from household duties even if she entertains aspirations of a modern career and lifestyle. The run-away success of these series is a telling indicator of how vigorously a billion households nod in agreement to the values they portray.

A very close friend of mine told me about a scarring experience she had never told  anyone else about nor does she intend to do. Despite all the corrective changes in law and all the campaigns by feminist organizations, if she were to come out and talk about it openly, she would be judged unfavorably and have to face much mental agony. Now if very close friends share such experiences only when they are very sure that they won’t be judged and are afraid of people knowing about them, I shudder to think of how many of the women I interact with everyday or pass by might have had to go through such ordeals as well. Is any woman, girl or child at all safe in this country? We might build walls. We might only travel in our own cars and never in the dead of the night. But is it any safer?

How can it be any safer for women, if their world is built on the notions of ‘shame’, ‘purity’, ‘decency’ and so on? By defining our ‘culture’ squarely on the basis of men’s right to judge a woman, we are creating the grounds for the justification of sexual violence in one perverted way or another.

A girl gets pinched and people look at her as if she invited it because she was wearing shorts. What kind of twisted culture is this? Let women roam around naked if they wish to. Nothing should give any one the right to anyone else’s body.

If as a family unit, we indulge in judging women according to a perverse logic of ‘decency’, we are bound to fail. None of my friends who have shared the experience with me, have shared it with members of their families. If your sister or your mother or your daughter or your niece can’t tell you what she has been through or is going through, what use is the family and all this  ‘sanskaar’ nonsense?

For this world to be any safer, the family has to be more open and stop being judgmental. How often do the men in the family know anything about what their women counterparts are going through? How many have a clear understanding of menstruation? How many families can talk about the body and sexuality without getting weird about it? My hunch is that this kind of families are far and few. But we can try to build such families in the future, can’t we?

If we remove the mystery, the aura of sexual perversion around women’s body in our culture, perhaps then the men will know better than to be so hopelessly pathetic and clueless about sexuality. If there is no cultural anxiety about ‘choli ke peeche kya hai’, (a popular Bollywood song, roughly translated as ‘what’s behind the skirt’) there will be less frustration, less show of power through sexual violence and less everyday horror of sexual molestation masquerading as harmless fun. I hope.