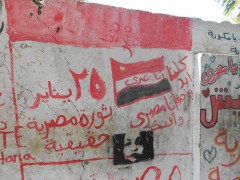 Graffiti has flourished with the onset of Arab revolutions, recording the ebb and flow of uprising across city walls in inspiring murals that mimic the triumphs and disappointments in a people’s fight for freedom.

Beyond graffiti, it is no secret that the arts and culture scene in Egypt and the region has boomed post-Arab Spring, the series of uprisings spurred an explosion in the region’s art; freedom acts as an invaluable subject matter for films, paintings, music, and theatre, among other art forms.

But in a way, street art embodies the effect of the Arab Spring on the region’s art scene; it represents a surge of creativity, a hint of rebellion, plenty of inspiration, and inevitable challenges.

Below, I attempt to dissect the art of graffiti, discussing its role as a revolutionary art in Arab Spring protests.

Graffiti: Oh wow, look at that.

Graffiti mirrors the inspiring nature of mass protests; they are both rebellious, physically, and aesthetically. There is a reason that graffiti has been written about, photographed, and raved about the world over. It is visually overwhelmingly, therefore utterly attention grabbing. Seeing art where art does not usually exist flirts with your senses; suddenly the world is an exhibition and there is hope for color.

Despite boasting undeniable aesthetics, graffiti had a valuable role to play in documenting the Arab Spring; it created a narrative of a nation in transition throughout Egypt’s revolution. Graffiti emerged as early on in Egypt’s revolution as January 25, when individuals started to express themselves through art, using electricity boxes and lampposts as canvas.

Their bold messages aimed to reflect demands and mobilize the public. Graffiti was not limited to Cairo; it spread to Alexandria and Mahalla, and various parts of the nation. And more artists joined the graffiti band as the months rolled on and the revolution continued, documenting flagrant violations of rights, glorying martyrs and revolutionaries, and influencing the masses. Today, the walls of Egypt reflect a long journey of struggle as the revolution continues.

The sprawling street art was by no means merely cosmetic; it archived the play by play of the revolution, combining powerful imagery with fervent words (at times poetic, at others profane) to keep the streets aware of the revolution’s pulse.

One minutes it’s there, the next, poof.

Graffiti has not been left untouched by authorities. Across the city, murals would be painted over and re-tackled by artists, and it goes on and on. Creating art, and bringing about change is a struggle for artists, and citizens.

Freedom of expression is very often stifled in the name of power preservation, not merely in countries with leaders who suffer from (or rather, quite enjoy) obvious control issues, such as in Syria or Saudi Arabia, but also in countries who flaunt their progressiveness, such as Russia, China and others.

It becomes obvious, from the crackdowns on artists and the obstacles put in place for freedom of expression, that regimes, particularly those on the selfish-with-power side, are threatened, by art’s influence on the minds of the people (to which they’d like to reserve full ownership).

But street art is the ultimate peaceful challenge to the status quo. It spreads throughout the city, charming passersby, filling them with the energy to change and create.

Protest art moved from the crowds to lampposts and electricity boxes in downtown Cairo during the initial days of the revolution. There were no boundaries to the creativity of wall paintings; graffiti emerged as a means for unshackled expression during at a time of battle. Keeping the revolution alive even through the political setbacks, street art kept the public engaged with the fight for freedom.