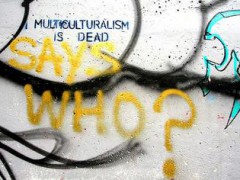 Is this what we have to stand for?

This blogpost is written by one of our bloggers who prefers to be anonymous.

I write this is in the aftermath of two global events, which in one way or another have affected me. The first was the murder of Shaima al-Awadi an American Iraqi woman, brutally beaten to death with a note left by her side stating ‘go back to your country’; the second, the trial of Anders Breivik for the murder of around 90 people in Norway, his method of venting his anger at rising multiculturalism in Norway.

Now what does this have to do with me, a British Pakistani Muslim? All these events have made an impact not just on their country, but also on every ethnic minority who sees them as an attack on their lives, on their stay in a white majority country. Add this to the speech given by David Cameron not so long ago, about how multiculturalism has failed in the UK, and it tells a pretty bleak story of the diversity of society today.

Multiculturalism accounts for the labour of 5 million people in the UK, the jobs they hold, the tax they pay, the diversity of our country. Britain would not be what it is today if it wasn’t for the black people, the Asians and the immigrants. We helped make this country, and to say it has failed gives a shocking sentiment of the resentment leveled at the public when it is in fact the government which has failed.

When Cameron uttered those words, he insulted many.

The case of Anders Breivik stunned the world, yet there were many who quietly agreed. Breivik himself stated his inspiration was a certain English Defence League (EDL), a racist far right group based in England who frequently hold protests against what they see as the root of all problems –  people like me. Asian, Muslim and blatantly not white. When Cameron made his speech, it was on the day of an EDL demonstration. They used his speech to ignite further flames fuelling the notion that rather than benefit the country, people like me were indeed hindering it.

The one event that really made an impact on me was Shaima’s murder. To leave a note saying “go back to your country” makes the point loud and clear. Many Muslims will feel unwelcome, in the US and here in the UK, where sooner or later it seems such a case is also bound to occur if the current situation stays the same. It impacted me, because I too have been told to go back to my own country, when really, my country is right here.

As a media enthusiast, I am ashamed to say that whilst individuals are to blame for the events, the media plays a part in fearmongering about  people from ethnic minorities.

In the UK, we were recently shown a two part series called Make Bradford British, aimed at bringing together the white, black and Asian people of Bradford City. Needless to say, I found to begin with, that the title was offensive. What does it mean to be British? The colour of your skin? It seems that way, as personally, every person on that show, regardless of their religion or race, seemed British to me. One prayed salah (prayer), one drank alcohol, one believed in no religion – but so what? They all got along; they all spoke to one another. Doesn’t living cohesively and in harmony make you one society, make you British? Apparently not. What makes a person British, according to this show, was having a Muslim woman pulling pints in a pub, an upper class white woman cooking Asian food for an Asian family. Yes, really. It was, in my opinion, bizarre. I am British. I don’t pull pints in a pub in my spare time, yet I do have white, black, Asian friends, I work with them, I talk to them, I socialize with them. I don’t distinguish between their skin colour or their religion. They are to me, simply people. My work colleagues have no issue if I use my lunch break to read my prayers, and neither do I if they eat their ham sandwiches at their desk next to mine. It is just the way it is. You can’t expect a person to change their entire lifestyle because it’s different to yours.

As former Labour minister Margaret Hodge said: “The state has to be very cautious in using its power to mould cultural values. It is not merely the Muslim (or other ethnic minority) community’s responsibility; we all have responsibilities, particularly to ensure that minority communities do not feel excluded.”

But we are forgetting: this is the country where chicken tikka is the nation’s favourite dish. Where the BBC Personality of the Year nominations included a refugee from Somalia, Mohammed Farah. Where 8% of the population is indeed from an ethnic minority.

What can we do to let people know that multiculturalism hasn’t failed? For me the answer is simple, the government needs to do more. There needs to be a lot of change by the government to include ethnic minorities. When they need to, as in the case of the recent riots, they can liaise with Muslim, black and other religious leaders very quickly to maintain calm. But only when necessary. There needs to be more dialogue between cultures. We don’t have to abandon our culture, our ancestry, to fit into a new British one. Britain has long been a place where many races and religion live together in one country. The government needs to stop highlighting our differences and let us live as we have done, since the early twentieth century.

The media too, papers like the Sun, Daily Mail etc need to stop their fear mongering. Not every person with a beard is a member of al-Qaeda, not every Asian woman is oppressed, not every ethnic minority is unpatriotic. These secret agendas need to stop. Fear mongering about those who are not white does not help the country whatsoever. Do we need to be like the United States are now, with every black or Muslim person looking over their shoulders, anticipating someone insulting them or pointing out their differences? We don’t want to end up there. That is what makes Britain special for me, that I feel safe here. I don’t think I stand out because I wear a hijab or my skin colour is not white. That is the beauty of multiculturalism.

We are British. We are Asian. Multiculturalism hasn’t failed.