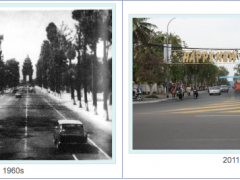 Cambodia is admired for its rapid transformation and infrastructure development. Recalling French colonization (1863-1953) and the Khmer Rouge period (1975-1979), Phnom Penh, the capital of the country, is rapidly becoming the latest Asian tourist playground with boutique hotels and new buildings.

Ron Gluckman, an American reporter who spent much of his time in Cambodia, labels Cambodia as one of Asia’s “economic basket-cases’ that has recently become the region’s surprise new tiger, roaring with double-digit growth rates and fueling a frenzy of new development projects. Cambodia has had its first construction boom in a thousand years and dozens of high-rises now reshape the skyline of mostly three-storey buildings in the capital Phnom Penh. Gluckmam also noted that the greatest economic growth in Cambodia could be seen along the highway of the capital towards the airport where cranes crowded in fields that only hosted stray cows just two years ago. The cranes are now gone, leaving vast buildings  topped with signs touting future plazas or a “Charming Tourist City.”

The success of illegal slum clearance efforts under the cloak of beautification, transformation and modernization of the capital in the last decade is reflected by the fact that the Phnom Penh governor, Kep Chuktema, was chosen as one of the finalists for the 2006 World Mayor Awards, an annual project organized by city majors. This project seeks to raise the profile of mayors worldwide, as well as  honour those who have served their communities well and contributed to the well-being of cities, nationally and internationally. The Phnom Penh municipality has adopted the 10 year-framework of a City Development Strategy (2005-2015) which aims to transform “Phnom Penh into the pearl of Asia.”

Despite the recognition given to government efforts in city development and beautification – efforts that come with the price tag of the cries of evicted residents – the city has not yet turned itself into a greener and healthier place. The city as it was in the late 1960s with the classical charming design of a city with towering trees along the main roads and main buildings  can hardly be seen today. The recent planting of small flowering trees along the roads is still not enough to make the city look as green as other cities in neighboring developed countries that I have seen.

Norodom Boulevard in the 1960s compared to 2011, photos taken from the City Hall Website

The Royal Railway in the 1940s compared to 2011, photos taken from the City Hall Website

Other  problems facing Phnom Penh are the apparent lack of any coordinated effort to implement the city’s urban development strategy and the absence of pedestrian sidewalks almost everywhere in town. If you are an environmentalist and want to commute to work or elsewhere hoping for a pollution-free and safe walk, you will  be sadly disappointed by this city which offers no  safe or secure pathway to walk along. If you’re lucky you will have just enough space to walk  alongside the heavy traffic without risking life or limb. The city’s sidewalks are now being used as parking lots or for commerce.

Here are some more images taken from travellingmark blog and you can also view this video :

Fortunately public parks have been recently established where the  public has free access to playgrounds for kids or exercise. These help  raise the social well-being of  people  as they can choose to do more sightseeing or take more exercise, and generally such parks also offer positive external benefits to society as a whole. In Japan, for example, where I spent two years studying,  I saw at least one large national park in each village where residents could meet up with their families and friends after work or on weekends and have BBQs. Such social arrangements contribute to the  well-being of people and the country and make for a healthier and more social society. People can enjoy their lives more with all these positive external benefits and also get together more often which has follow-on effects for the economy as they spend more money in the country for travel, eating out  or other consumption.

The rapid city development would be even given value addition if the Government would envision the town to be greener and healthier by planting more trees along the main roads as it had done in the past. It could also alot more public spaces for public parks or other spots for social well-being, rather than  transforming the country  into concrete buildings. To add further, while most of city development has been exchanged with the eviction of poor residents who are often not well compensated, development notion should be revisited. As Michael.Todaro and Stepen C. Smith posits that development must “represent the whole gamut of change by which an entire social system, tuned to the diverse basic needs and desires of individuals and social groups within that system, moves away from a condition of life widely perceived as unsatisfactory toward a situation or condition of life regarded as materially and spiritually better.”