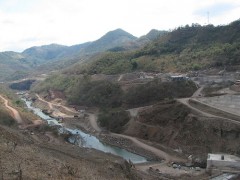 Abstract: Hydroelectric power is very much like petrol: no one thinks we’ll ever run out of it until we do. Water is bountiful in Central America, you may think; we have rain pouring down on us for almost six months of the year and water is, by definition, a renewable resource. But how do we keep up our power production when the drought hits? Will  the region’s recent move to wind and geothermal-generated power prove to be our safest, greenest bet for power production in times of drought?

El Salvador is a country that lives on its former and generally fictitious greatness. You frequently hear our economic analysts say things like, “Back in the sixties, when we had a common Central American market, we used to be the number one producer of…”.  We’re such a tiny country yet our government has such a huge ego: El Salvador is definitely a country with a Napoleon complex.

Though it’s hard to narrow down the numerous risible aspects that fueled our fake former greatness to just one single factor, let me be bold and say that the Salvadoran contribution to regional electric power production is the jewel in the crown.  El Salvador used to be the number one producer of hydroelectric power in the region. We used to have the cheapest electric bills as well. We used to, we used to, we used to … all of that is dead and gone, but we keep on living on the legend of a tiny green country that produced enough power to keep a seven-country region up and running. We should, I suspect, take a cool look at the reasons why.

Hydroelectric power is very much like petrol: no one thinks we’ll ever run out of it until we do. Water is bountiful in this region of ours, you may think; we have rain pouring down on us for almost six months of the year and water is, by definition, a renewable resource. Then our country, the top power generator of the region, descends into civil war, starts cutting trees down, tearing acres and acres of land apart, and modifying the natural course of rivers so the wealthiest landowners who virtually own and run the country as a farm can water their coffee crops.  Then our country is the second smallest but the most densely populated country in Latin America, so land that isn’t owned by anyone is usually deforested so that more and more families can build their cabins, raise their children and try to survive these cruel and unequal times in a once-great land.

Why is this relevant? Oh yes, hydroelectric power. Our fake national ego is not big enough to meet the regional demand for power that keeps on increasing year by year, and neither is our hydroelectric power production. Costa Rica, in fact, has been topping our mega-watt production for a number of years now. Their bet? Not relying so much on the weather. Climate change has hit us and has hit us hard. Drought is expected to be severe in the coming years and Central America should be prepared and ready. Both Costa Rica and Honduras are now generating and selling wind power.

Geothermal plants now produce 25% of our national power mix and thermal plants are also an option, though they use petroleum, which is not our favorite choice nowadays. The good news is that in a region full of volcanoes, and in a country like El Salvador that has 23 volcanoes , chances are that geothermal energy might be the way to go if our Napoleonic government finally decides to acknowledge the fact that our greatness is gone, that water is not here forever and that – if we ever want to believe in our greatness again – we should, for a change, value the land beneath our feet.

So far, power production in the region is holding steady. El Salvador’s hydroelectric power production, however, will not increase given its current infrastructure and the ongoing drought. Current efforts to build two more hydroelectric power plants would mean massive relocation of the local population and diverting rivers and are widely rejected by Salvadorans.  Market demand will not decrease, though. Geothermal power is more expensive to produce, yes; but is it our best bet? Should we choose thermal-generated power instead, despite the high price of oil nowadays? Will wind energy receive more funding and support? There are too many open questions floating around while I write this. The fan in my room is on and my computer and router are plugged in; demand, as I seem to embody it,  will never decrease. Our governments really need to move faster.