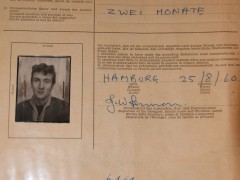 Although primarily an economic union forged with the aim of bringing long-lasting peace to a continent devastated by bloody wars, the European Union soon became an identity-centered construct. European citizenship brought about fundamental individual freedoms and there has been hope that decades of integration would successfully shape a single identity, a unified ethos, a European demos.

One of the main obstacles towards the achievement of this grandiose ambition is, in my opinion, the pathetically low level of intra-EU labour mobility. Higher labour mobility between Member States would bring not only net macroeconomic benefits to both sending and receiving countries (as empirical evidence abundantly shows), but it would also breed a common identity based on solidarity and shared values. Needless to say sharing such an identity could give us a real facelift in the economic storm we’re currently sailing through.

There are countless arguments why the benefits of labour mobility within the EU clearly outweigh its costs. Labour mobility, if encouraged, limits illegal economic migration and black labour, by formalising the underground economy. It cushions the effects of economic shocks and acts as an automatic macroeconomic stabilizer. Internal migration can be an effective way of reducing disequilibria on the labour markets, especially in a monetary union with no flexible exchange rates as an adjustment mechanism.

In addition, labour mobility decreases the wage gap in the union (for instance, when it joined the EU, Latvia had an average wage which was one eighth of the EU-15 average; by 2007, it had gone down to a ratio of 1 to 5.5). Statistics indicate that, after the two waves of enlargement in 2004 and 2007, labour migration within the EU increased aggregate welfare (the aggregate GDP of the integrated area increase due to labour mobility by about 0.2%, which corresponds to a sum of 24 billion euros). Unemployment went down both in sending and receiving countries and skills bottlenecks were addressed.

Contrary to popular belief, migrants from new EU Member States – my homeland Romania being one of them – did not depress the wages or harm the employment prospects of  domestic workers. Such fears had bred the policy of transitional labour market restrictions, which still plagues the EU today. At the same time, despite traditional xenophic and nationalistic discourse that citizens from new Member States will flood Western Europe as “welfare scroungers” and cut domestic jobs receiving countries, several years after Romania and Bulgaria’s accession to the EU, workers from these Member States constitute less than 1% of the working-age population in the main host states.

In 1960 John Lennon had to get a permit to be able to work in Germany. Despite being EU citizens, Romanians and Bulgarians still need a work permit in many EU Member States. Photo by Stephen Dyrgas on Flickr, CC BY-NC-ND 2.0.

According to official Council statements, “the Europe 2020 Strategy puts particular emphasis on promoting labour mobility, both domestic and migrant, for addressing labour and skills shortages and rendering the EU workforce more adaptable to change. Mobility of workers is essential for achieving an effective internal market, a competitive EU economy, dynamic labour markets, efficient matching of jobseekers to jobs and of employers to skills.”

Reality however leaves a bitter aftertaste: transitional labour market restrictions still persist, there is no pension system portability, efficient mutual recognition of professional qualifications remains a distant dream, and all in all the union is drifting further apart…