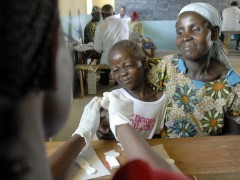 Malaria is a febrile illness with prevalence across the Global South (it is largely eradicated in North America as of the mid-twentieth century). Initial symptoms of Malaria include  fever, headache, chills and vomiting. Children with severe malaria frequently develop one or more of the following symptoms: severe anemia, respiratory distress, or cerebral malaria. It is transmitted exclusively through the bites of Anopheles mosquitoes.

There are an estimated 20 Anopheles species globally, and they are distributed mostly near or below the equator. According The Lancet, the cumulative probability of death due to malaria is higher in countries with warmer climates.

On June 18, 2012, journalist Geoffrey York wrote an article entitled, “Congo’s malaria surge stumps scientists” the Canadian paper, the Globe and Mail. The article covered the rising prevalence of malaria in the Democratic Republic of the Congo, where about 200,000 die of the disease annually, making it the country’s leading cause of death. Research indicates that Malaria cases in the Democratic Republic of the Congo are up 250 percent since 2009 according to statistics from clinics run by Médecins sans frontières (Doctors Without Borders).

Possible causes of this increase in malarial transmission and infection include climate change and increased resistance to pesticides *which are often used to treat bed nets) and Artemisinin, the standard drug used to treat the parasites that cause Malaria. Furthermore, there is the problem of counterfeit pharmaceuticals, as covered in the Local View “Fight the Drug, not the Disease.”

This problem is seen elsewhere; as researchers at the Dakar-based Institut de Recherche pour le Developpement found that 37 percent of Anopheles gambiae mosquitoes – the species responsible for half of Africa’s malaria cases – were resistant to the insecticide deltamethrin, recommended by the World Health Organisation to treat bed nets. Dr Jean-Francois Trape of the Institut de Recherche pour le Developpement and his colleagues note that there has been a rise in malaria cases in Zambia, Rwanda and the island of Sao Tome – countries where cases and deaths were previously reduced following the introduction of bed nets and other measures.

As stated in the Lead Article entitled “Death Threat” it will be necessary for low and middle-income countries- those especially affected by Malaria- to take measures to prevent transmission, and make effective medical more accessible, while leveraging aid from multinational institutions and developed countries. This is especially salient as Malaria costs the continent an estimated total $12 billion annually.