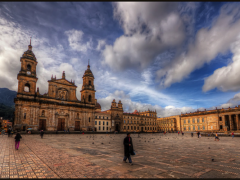 Bolivar Square in Bogota, with the Congress and Government Palace in the background
Photo by Pedro Szekely used under licence CC BY-SA 2.0, on Flickr

Colombia has a presidential system of government which means that the head of government is elected through popular vote and that the executive and legislative terms are fixed and do not need mutual ratification. So even if there is a clear separation of powers, the system gives certain prerogatives to the president and the government. In Latin America this is very important. As the “caudillo”(military or political leaders who took over the administration of countries with wide popular support), a figure deeply rooted in Latin American history, sometimes the president is the state, meaning that the figure and character of the person in charge are so central that other institutions have only secondary importance.

In Colombia the separation of powers exists formally and in practice, but with a different twist based on ideas of flexibility and collaboration. According to the Constitution, and the interpretation made by the Constitutional Court, Colombia has adopted a flexible distribution of the different functions of public power that rests on the principle of collaboration among different state organs and that uses mechanisms of political control. This means that although the functions needed to achieve state goals are given to autonomous and independent organs, under the constraints of mutual collaboration and reciprocal control such separation is not absolute. The constitutional structure invokes the model of checks and balances with the purpose of allowing more efficiency in the performance of functions and of guaranteeing a certain degree of liberty. This explains why the tension between powers is structural and not episodic as the BTI report suggests, and has wider implications and effects than those shown by the cases cited by it. Therefore, you could say that Uribe was quite a contentious president, and that the tensions were just more acute during his period in office – but the problem precedes his government.

One of the implications is that, as a presidential state, some supremacy is given to the executive branch, specifically to the President who, once elected, becomes the chief of state, head of government and the military forces, the supreme administrative authority, chief executor of the national budget, etc. The constitution also grants the President the ability to declare a state of emergency when public order or national security are threatened by war, internal commotion, or  a natural or social catastrophe or crisis. These states of emergency are supposed to be temporary and extraordinary, yet the temptation to prolong them is difficult to resist as they allow for concentration of powers. Governments tend to abuse this opening to pass controversial legislation or to extend restriction of rights, which of course goes against democracy and the equilibrium of power. This temptation has haunted the past twenty years like a specter, and is well-known throughout Latin American political history.

On the other hand, collaborative flexibility blurs the boundaries of functions and the scope of state organs. Many functions end up overlapping, which creates tensions between offices and duplicates efforts, making the state´s organs inefficient. You could say that the tensions mentioned in the report exist not only between the Executive and the Judiciary, but also between the Judiciary and the Legislature. Stagnation in Congress has led judges to use tutelage to force the administration to adopt and enforce rules, as in the case of healthcare. In practice, the Constitutional Court legislates when adopting decisions called differed or modulated which have an erga omnes effect, and thus have the status of laws. Tension, competition and overlapping functions are also present in the relations between the Supreme and the Constitutional Courts. Since fundamental rights (which are the Constitutional Court`s competence) prevail over other rights, ruling on their protection has led to modification of some decisions of the Supreme Court, so that no one is sure anymore whether decisions made by the Supreme Court are going to be overruled by the Constitutional Court. This seriously weakens the Supreme Court`s credibility as the upper and decisive legal instance.

The worst thing, however, is that Congress has lost a great deal of its legitimacy. The performance of legislators has been more than disappointing. Either they spend time and money discussing laws that benefit them or their “clients” or they just won´t attend debates and sessions, inventing all kinds of sicknesses and excuses. Basic issues of great importance for the country as a whole are postponed or blocked. Given such an impasse, it’s easy to believe that the government and the judiciary are doing well by taking over the legislative initiative.

The structure of the Colombian state is quite complex. In an effort to guarantee the proper functioning of institutions, organs of control and vigilance were created. This of course has generated a huge bureaucratic apparatus bound by formal and sometimes unnecessary procedures, and burdened with an overabundance of norms and rules that sometimes are redundant or impossible to understand. Even if there now is a new law that eliminates some of these unneeded processes and streamlines and simplifies others, there is still a huge inefficient structure that cannot guarantee either transparency or accountability. A lot of time and money is spent on double efforts while constant struggle and competition over who is in charge of what has an adverse effect on the stability and credibility of state institutions. And as the political elite continue to prioritize their own interests over those of the nation, it’s the people who are the biggest losers.