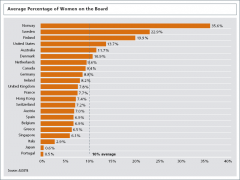 During a recent internship, I interviewed a female CEO for International Women’s Day. She said the glass ceiling in Australia has not shattered, but there are a few fractures in it. After talking with this inspiring woman, I began to give thought to how I will carve my career as a woman. This article explores the current difficulties facing women who seek to enter executive roles – the barriers to promotion, including leadership styles, perceptions about gender, unconscious bias, networking, organisational culture, work life balance, and inequitable pay – and recommendations on how to fix them.

So what is the situation of female executives in Australia? Have the efforts toward gender equality in our society reached into the professional world?

Average Percentage of Women on the Board worldwide, by affisch, on Flickr, 2009, CC BY-NC-SA 2.0

Compared with most OECD countries, including the UK, the US, Canada, South Africa and New Zealand, our nation has the smallest percentage of women in executive business roles. A 2010 census by the Equal Opportunities for Women in the Workplace Agency found that women hold only 104 of 1300 key executive positions in ASX 200 companies, with a total of seven female chief executives. Despite the fact that 60% of Australian university graduates are women and 52% of men believe women to have equal opportunities in the workplace, men are nine times more likely to hold an executive role in large corporations.

Why are women executives so under-represented in Australia?

What is stopping women from reaching these higher echelons of the professional world? According to a survey, 80 percent of women feel their leadership style is not valued, either because their feminine leadership style is deemed a weakness due to emotionalism, or their display of masculine qualities makes them seem too forceful or abrasive. According to Jetstar Group Chief Executive Officer Jayne Hrdlicka, the key is to realise that men and women’s styles are different, to evolve to straddle the strengths of both styles, and to advocate for people with different styles so that inroads can be made to dismantle unconscious biases regarding gender.

In a survey of 815 respondents by Bain & Co and Chief Executive Women, a large number of female respondents felt that unconscious biases shape their workplace’s organisational culture, producing a competitive, homogeneously masculine culture with ‘fixed or closed thinking’. Women are much less likely to recommend their companies as a place to work for this reason. To compound this difficulty, a study by Australian Human Resources Institute (AHRI) revealed that two-thirds of respondents believed managers were ill-equipped to manage gender bias, highlighting the need to train managers to recognise and develop long-term strategies to manage bias in decisions.

How should women seek to rise in such an environment?

Rosemary Howard, head of the Australian Graduate School of Management Executive Programs, claims that women often forget that it is not enough to work hard – they must balance hard work with networking to rise to the top. Women must make a consistent effort to prove their worth to the organisation, which involves building relationships and collaborating.

But it is equally important that women foster supportive corporate environments and provide role models for younger generations. A survey by the Australian Human Resources Institute (AHRI) found that, while three-quarters of respondents say their organisation officially supports gender equity, only half of that number have targets in place to enact change. Companies need to help women in middle management forge pathways to higher executive levels to attract and retain women in the long-term. The Equal Opportunity for Women in the Workplace Act (2013) is making headway. Under new legislation, business must report on tangible outcomes of workplace gender equity plans, including the gender composition of their organisations.

Women in the middle years of their career, when it becomes crucial to develop broad experience such as management roles and international assignments, often opt out of an executive career to access flexible working arrangements to balance family commitments. Organisations must train managers to redesign jobs and accommodate flexibility, to retain organisation’s key talent during those middle years.

Why is it important to fix this gender gap?

I’ll finish this article with personal advice I received from the woman I interviewed: “Constantly learn and have diverse experiences. Grasp every opportunity. Be competent, confident and self-reflexive. Work hard. Maybe your generation can break that glass ceiling.”

I'm an Australian full time student and part-time volunteer, and one day hope to work in not-for-profit PR. My multi-faceted interests include writing, reading, current affairs, intercultural relations, history, philosophy, and art. I write for Future Challenges because I'm interested in how public debate can generate solutions for a sustainable global future.