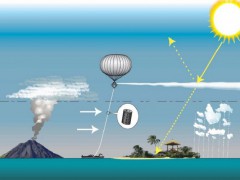 ~If the earth must lose that great portion of its pleasantness which it owes to things that the unlimited increase of wealth and population would extirpate from it, for the mere purpose of enabling it to support a larger, but not a better or a happier population, I sincerely hope, for the sake of posterity, that they will be content to be stationary, long before necessity compels them to it. A new buzz word is emerging in scientific circles, amongst leading nations and within national security agencies. Geoengineering, or the deliberate and large-scale manipulation of the planetary environment to counteract anthropogenic climate change, has been presented as a cost-effective option to combat the current atmospheric concentration of carbon dioxide and could be the only way to prevent calamitous climate change in our lifetime. Attempts to effectively reduce CO2 emissions now or in the future will cause economic strain, there’s no way around it – the global economy is still so critically dependent on cost-effective fossil fuels that a short-term transition to alternative forms of energy is very unlikely.

The most popular proposed geoengineering technologies for reversing the effects of global warming include Solar Radiation Management (SRM), or scattering sulphate aerosols into the atmosphere to reflect the sun’s energy to block infrared radiation and rising temperatures; and Carbon Dioxide Removal (CDR), which would store carbon dioxide in the deep ocean to trigger algal blooms. Current reports address the potential risks of deploying these technologies, such as accelerating ocean acidification and irreversibly altering the stratosphere, but the long-term environmental impact is still unknown. Economically, climate engineering is an attractive option because the cost is trivial compared to the costs of curbing carbon pollution, and indeed more effective than doing nothing.

In May 2013, the average daily atmospheric concentration of CO2 surpassed 400ppm – a threshold that hasn’t been crossed in over 3 million years. This grave milestone has spurred speculation on whether geoengineering is a viable option, or a potential danger with life-altering consequences. In economic terms, geoengineering is an attractive response to climate change because the cost of implementing the technology is negligible when compared to the tall order of the global reduction of carbon pollution. Yet perhaps more to the point, the mere presence of geoengineering as a cost-effective option may weaken the resolve among leading nations to reduce carbon emissions.

Even the Central Intelligence Agency (CIA) is taking an interest. In March 2013, the CIA teamed up with the National Academy of Science (NAS), the National Oceanic and Atmospheric Administration and NASA to fund a scientific study that will investigate whether geoengineering could be used to stall the effects of climate change. The study will focus on a “limited number of proposed geoengineering techniques in order to assess the political impacts of deploying these technologies related to the environment, global economy and national security.” Yet beyond the implications of global climate combat lies the question of which entity will foot the bill and how will any action, unilaterally, or through a consortium of states, be decided upon democratically?

The 21 month project – the first NAS geoengineering study funded by an intelligence agency to the modest tune of $630,000 – comes as a shock to some, incites conspiracy theories in others, and on a grand scale, presents a geo-political nightmare. It’s no surprise that government agencies are seeking radical scientific approaches to combat climate change. Over the past 30 years, most nations have experienced unprecedented economic growth which has spawned a number of macro trends, including depletion of natural resources and acceleration of carbon emissions, that threaten the capacity of the planet to sustain human life. But in addressing these trends, it’s important to consider the political economy of climate change – if the CIA is funding research on geoengineering, then who will be responsible for geoengineering missions 10 or 20 years from now?

The current US defense budget for military spending is approximately $700 billion. In 2011, R&D accounted for about $80 billion of that sum. If geoengineering is going to be “an issue of national security” then can we expect folks at the Department of Defense to become the weathermen of the future? Will tax dollars be funneled in? Will we farm out the projects to private corporations? Will geoengineering become a profitable industry as defense has? These are fair questions to ask as the issue of geoengineering makes its way onto the public stage.

This isn’t the first time the CIA has been interested in climate change. The agency’s Center on Climate Change and National Security was formed in 2009 to monitor the relationships between global warming and intelligence and security issues, but was disbanded in the fall of 2012 because some Republicans thought it was a waste of time and the agency had more pressing problems, i.e. terrorists. Geoengineering isn’t new to governments or big business either. During the Vietnam War, the US military seeded clouds (dispersed substances in the air to create cloud condensation or ice nuclei) to disrupt the enemy’s supply lines along the Ho Chi Min Trail. In 2008, it was widely reported that the Chinese government used the same technique prior to the Olympic games, allegedly averting cloud cover from the opening ceremonies by firing dry iodide crystals into rain clouds over Beijing. And in the private sector, Russ George, the one time head of Planktos, dumped 100 tons of iron dust into the Pacific Ocean off British Columbia to create a plankton boom that was supposed to combat climate change by absorbing carbon dioxide from the air. George’s unsuccessful efforts were harshly criticized, and earned him names in the media such as “ocean hacker” and “rogue-geoengineer.” This leads us to think that if one wealthy individual could attempt to transform the atmosphere, what would stop rogue nations or self-serving corporations from bringing on a new ice age or extending monsoon seasons for their own gain? Furthermore, where will the regulation come from, in particular the development and sale of these technologies in the private sector?

Evidently, this is precisely why the CIA is funding this research – to know everything they can about the implications of weather-controlling technologies in the hands of rouge states and unilateral actors who could do anything from melt glacial terrain to control rainfall, which would result in any number of variables posing a threat to national security, including the opening of new trade routes, more available land, and controlled droughts and food growth cycles affecting or altering farmland, alternative food and clean water sources.

Yet beyond national security, we have to ask ourselves: At what cost, the planet? Pumping chemicals into the air, fertilizing the ocean with minerals, launching mirrors into space and other experimental schemes cannot be considered without acknowledging the high-risk, long-term effects they may have on the environment, whether it’s triggering toxic tides, or interfering with monsoons in Africa and Asia.

Is the treatment worse than the disease? When I think about this, I see images of an obese person eating a cheeseburger and walking on a treadmill in an attempt to lose weight. As we approach the tipping point, we have to question whether we as a human race are making a progressive commitment to developing alternative forms of clean energy on a global scale so that we might have the chance to decarbonize global power generation in the next fifty years; otherwise, we are simply palliating the preconditions of our planetary demise.

These radical interventions may cause irreversible effects on our oceans and atmospheric chemistry, but the biggest risk is that presently we do not know the long-term implications of tinkering with Mother Earth. And in terms of geopolitics, any action by a nation, laterally or unilaterally, will be done without unanimous consent, regardless of the fact that it would affect everyone on the planet. Perhaps the most frightening scenario is that geoengineering potentially gives people the power to devastate entire geographical areas and populations at the press of a button.