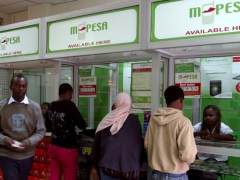 The report also indicated a number of reasons  for this sad state of affairs which includes  poverty, cost involved, travel distance and amount of paper work involved in opening an account. And it does not stop there.

I had chat with some of the un-banked Kenyans living in the rural areas. In my interaction with them, I found out that; not all of them are poor, just that they don’t see the need of having a bank account. Call it ignorance or something but to them, its better option keeping their money closer and spending any time they want than saving in the banks. To them, the banks have a complex application process and procedure which won’t won’t make any difference when they keep their money with them.

Banks use to have unnecessary charges but that is no longer the case although the myth continues. The main attraction of M-Pesa is that it gives a simple solution to the restrictions and problem of the traditional  banking system. It started as a way to send money from the urban centers to rural areas by the working class in Kenya. The tag line was simple: “send money home“.

According to the latest report by Communication Commission of Kenya there are 18.9 million mobile money transfer subscribers in Kenya. That is almost a half of Kenyan population which stood at 38 million according to the last census done in 2009.  Within the same report there are 47,997 M-Pesa agents across the country, that is about 50 times the number of the branches of  the entire banking system.

In the early days of m-pesa, Banks in Kenya lobbied for it to be banned but the Government resisted the move. After realizing that M-Pesa was going nowhere  they turned around and started to offer their own version of mobile banking. But again that hit a wall due to the  fact that they had to use the same mobile service providers to deliver their services. This was in direct competition with M-Pesa and other mobile payment systems in Kenya.

With everyone using m-pesa, the initiatives by the banks did not take off . At long last the banks realized that the only way out is to do partnership with m-pesa, as agents or super agents. Now every bank in Kenya is plugged on m-pesa one way or another.

Looking at the number of people with mobile phones across the world, you’ll realize that mobile payment system is a ready made solution to this seemingly complex problem.There is already an effort to introduce mobile banking system in many developing countries although none of them has worked as well as in Kenya. To understand why Mobile payment and banking system is not catching up in the other countries, we need to go back and understand how M-Pesa was marketed in Kenya initially.

The pioneer of this specific industry is Safaricom, a cell phone service provider, with their system “m-pesa”. Launched 2007 in Kenya, this service enabled subscribers to transfer money which could be withdrawn in every store located on the territory. M-Pesa gained roughly 5 million clients which represents roughly 13% of the Kenyan population. It is necessary to know that this service only works with the newest generation of SIM cards. This phenomenon propagates and developed in all of Africa; notably Congo, Côte d’Ivoire, Mali, and Zambia.