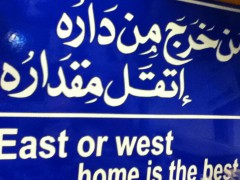 Immigration is largely looked at through an economic prism. But, that’s not all there is to it.

In a country like Egypt, where competition for employment is fierce, and the jobs that are available are generally not financially, and at times not professionally rewarding, it is no surprise that many well-educated Egyptians head overseas in pursuit for better pay and a more challenging career.

Yet, despite being high up on the list, money isn’t the only reason Egyptian youth leave their homes and endeavor to study or work in a foreign country.

I’ve spoken to four Egyptians in their 20s, who were previously, or are currently, studying or working abroad- and they reveal that the quest for cash isn’t the only factor fueling their immigration.

Here’s more about why Ahmed Adly, Karim El Rabiey, Maged Sami, and Ahmed Abulhassan (in order of who replied to my emails soonest) left, and the reasons they are considering returning to Egypt.

Ahmed Adly, who left after years of working in Egypt to seek employment in New York City, says his choice to go abroad was less about financial gain and more about cross-cultural exposure.

Adly tells me, “I left because I firmly believe that we’re not meant to spend our lives in one place, we can’t live and die without experiencing different cultures, seeing different places.”

From an education in New York to taking up two different jobs in Toronto, Canada, Karim El Rabiey explains that his choice to study and work overseas was all about experimentation and taking risks.

“I left Egypt to make mistakes,” says El Rabiey. “ It’s better to make mistakes here, and try new things out, because firstly, Egypt is not as open to mistake-making. You’re expected to hit every shot perfectly…A sort of culture gets built where we become afraid to make mistakes, and in turn, only do tried-and-proven methodologies. And secondly, Egypt can’t necessarily afford everyone to make mistakes. Egypt is not in as comfortable a state as the US or Canada to allow for mistakes. It can’t afford the risks as much, due to income levels, resources, and education.”

Meanwhile, Maged Sami’s decision to study in Canada was all about the disparities in the levels of education. He says,  “I left Egypt primarily to seek well-rounded quality education; an education that could offer more in personal development than just book learning.”

“I left Egypt not to ‘leave Egypt’ but to experience different things, meet new people, and challenge myself. I am a strong believer that if it doesn’t challenge you, it doesn’t change you!”

Unlike the other three young men, Ahmed Abulhassan, who currently resides and works in Dubai, says it wasn’t really his choice to leave Egypt; it was more of a family decision. That’s not to say he doesn’t see the benefits of living in the lavish city.

“I justified it (to feel better) by telling myself the following: salaries are ten fold (almost exactly), I’ve lived away from home for the past five years and I don’t get to spend that many more years with my parents who are old and not doing very well health wise always, and that it’s the only way to save up enough to be able to move back home comfortably.”

The four boys are currently toying around with the idea of moving back to Egypt- but again, it isn’t for the money. In fact, it is despite of a potentially large slash in their paychecks.

Ahmed Adly already moved back, for the following reasons; “I personally came back to open up my own business which has been my dream forever, also I came back because you can’t live without your friends and you can’t make new friends, that’s a myth.”

For Abulhassan, the decision to return is also emotional, he says he misses home and misses Egyptians. “I’m not happy being away,” he says. “That’s it. I’ve lived in many countries, I’ve never felt (believe it or not) comfortable or fulfilled until I lived in Egypt…I keep thinking about the people, things, places, and good moments I’m missing out on.”

Maged Sami always ruled out the possibility of missing out on a life in Cairo. “The plan was to learn what I can about my field and the world at large, and bring it back home,” he says. “Egypt is where I can utilize what I learn to its maximum potential, where I can give back to the place that has given me the most, and where I can make the biggest difference.”

Also driven by a sense of responsibility towards contributing the skills he’s amassed abroad to rebuilding post-revolutionary Egypt, and committed to bring back the entrepreneurial spirit that he witnessed abroad Karim El Rabiey is contemplating a move to Cairo.

He says, “Egypt as a nation, is now relying solely on its citizens to shape it. And it’s missing one of its citizens (hopefully intelligent citizen)… I’m abroad this whole time, I’ll probably learn a lot of things – but what’s that mean to Egypt?”

Despite the urge or the plan to come home, some Egyptians abroad find it hard to return because of fear. Be it fear of not “making it” back home, or fear of the transformations currently unfolding in post-revolutionary Egypt.

Yet, the determination is there. As Sami puts it, “A smooth sea never made a skilled mariner, and just like I left Egypt in search of new challenges, I am coming back to face those that have arisen at home.”