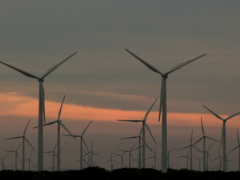 “Leave the oil in the soil and the coal in the hole”  is one of the many chants that young activists repeat at the United Nations Climate Change Conference year after year. This phrase comes from the poem read by the Nigerian environmentalist Nnimmo Bassey at the World People’s Conference on Climate Change in Cochabamba, Bolivia in 2010. It clearly speaks for the transition towards renewable energies such as wind, sunlight, tides, and geothermal heating.

Renewable energy seems to bring a new opportunity for the global economy. Some countries that rely on expensive imports of non-renewable oil supplies have already taken the first step. “For Europe, [renewable energy is] a great opportunity to stop relying on the importation of fossil fuels, especially oil. We have seen countries like France that have taken the lead on the matter”, Edmundo de Alba, 2007 Mexican Nobel Peace Prize winner, said in a speech he gave at the climate talks in Mexico City.

Sadly, for many developing countries changing to clean energy is not as easy as it sounds. What stops nations from fully embracing renewable energy is that the technology is still expensive, at least as an initial investment.

Some of the positive aspects of renewable energy are that it brings a secure energy supply as well as more job opportunities for locals, without too much discrepancy between what is aimed for and the actual roll-out. Even so, companies sometimes forget the ethics and only see the benefits of implementing their strategies in rural areas. It’s all too easy to forget the indigenous communities whose lives are affected by production of energy and overlook the potential consequences that “development” and “green growth” can often have for them – as what happened in the Istmo in southern Mexico illustrates.

Last year, there was much rioting in Oaxaca, southern Mexico, an area with a high concentration of indigenous communities, poverty, and illiteracy. The riots were over local disagreements with the development of wind farms.

Who would have thought that when the country seemed finally to be moving beyond oil everything was not going as well as it seemed. In our collective imagination, renewable energy is equated with progress and new economic opportunities for the country. Yet indigenous communities have shown resistance as their land has been taken away for energy production. Landowners earn monthly an average of 20 dollars per hectare for the rent of their land for wind turbines in Oaxaca.

Mexico’s former President Felipe Calderon at the inauguration of the wind farms in Oaxaca. Photo taken from Gabino Cué Monteagudo’s photostream in Flickr.

Residents from La Ventosa (“The Place of Winds”), in the same state, objected that wind farms also impact on their fish and livestock, quite apart from killing birds and firing conflicts within the communities. They also objected bitterly that much of the energy generated on their land was not even going to their area.

According to cipamericas.org, “villagers said ten years ago the government had created a kind of wind energy mafia by giving illegal concessions to mainly to Spanish companies such as Iberdrola, Union Fenosa and Preneal. These companies obtained building and development permits through corrupt local authorities.”

Ideally the benefits of Mexico’s energy transition should outweigh its downside. Producing renewable energy locally can offer a practicable alternative for isolated rural communities deprived of electrical power.  But observance of ethical and human rights interests should always accompany these goals.

Climate change, damage from coal pollution and the high price of oil are driving renewable energy legislation across the world. But let’s not forget that sometimes there are negative aspects from the renewable energy model that have negative local consequences including land rights violations and violations of the rights of indigenous communities.  Such violations should always be avoided. After all, energy transformation should first and foremost be for the wellbeing of the people, not for profit alone.