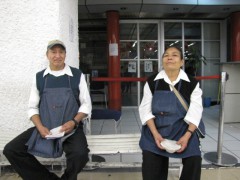 Far beyond the aggregated numbers of an urban economy lies a silent and untraceable population working everyday to sustain entire families, doing whatever is humanly possible to get out of poverty.

From the woman picking up garbage to housemaids, prostitutes, newspaper sellers, housewives and “viene vienes” (those who illegally rent streets as parking lots), countless numbers of women scratch a living in the city without any acknowledgement of the role they play in the economy.

Lack of opportunities in the formal employment market for women (compared to men) drives them to seek informal jobs which often lack any prospect of promotion as well as any social security safety net, and thus place them and their families in a highly precarious economic predicament.

In Mexico City, only 49% of women are considered to be part of Mexico’s economically active population – measured by the number of people currently working or looking for work in the formal job market – compared to 72.5% of men. What this statistic fails to take account of, however, is that while the other 51% of women are not “officially” working or seeking work, they could well be actively engaged in the informal sector.

According to the National Council Against Discrimination’s (CONAPRED) 2010 report, 21.2% women in Mexico consider work to be their main problem. At the same time, the World Development Report 2012 states that for each dollar men earn in Mexico, women earn a mere 20 cents.

To get a more personal insight into the silent economy in Mexico City, I interviewed three women whom I thought would be worth knowing because of their informal and extremely commonplace occupations. In fact, so commonplace that even though I had often seen them around my neighborhood, I had never thought about the implications of the work they  were doing.

Rosario Urbina González is an old woman who goes door to door collecting paper she can later sell for recycling. She left school in the sixth grade and now works to help her husband pay for the costs of maintaining the household. She earns around 45 dollars a month.

Lucía Hernández Nava works as a housemaid for a middle class household. She left school in the second grade and started working because she needed the money to support her family. Even though she loves what she does, the pressure she’s under sometimes takes its toll as her husband is a seasonal worker and her three sons solely depend on the 250 dollars she brings home each month.

The woman from the supermarket is in her 70s and didn’t give me her name. She never attended school and had a difficult time understanding the questions I asked her. She works packing customers’ shopping into bags in order to earn a few tips. She earns around 200 dollars a month which helps cover the medical bills for her sick son.

The man sitting next to the “woman from the supermarket” helped her express herself for the interview. Photo by Daniel Kapellmann

What I found in all three cases was that none of the women had advanced education, that they all worked long hours for very little money and that none of them were covered by social security in their jobs.

The common problem all three women face is that the conditions under which they work don’t provide them or their families with an adequate economic basis for addressing health problems, realizing personal investments or paying for a better education that could enable them to escape from a life of poverty.

The Mexican government has recognized the need to push for a more equitable labor market. In 1997 an organization called Inmujeres was established in Mexico City to forward various advocacy programs in support of more formal labor opportunities for women.

One such program is the General Program for Equal Opportunities and No Discrimination towards Women 2013-2018, whose early results are yet to be announced. It has adopted three main strategies: analyzing hiring conditions, promoting labor equality, and promoting economic initiatives such as savings and the promotion of small business set ups.

What these three strategies have in common is that they all seek to promote a formal economy with much greater female participation. If women are to escape poverty, it is necessary to create adequate conditions for equal opportunities in a formal labor market that offers them more stable personal finances as well as benefits enshrined in law.

The challenge is still how to achieve the same opportunities for everyone, both men and women, and one promising first step in this direction would be to create greater public awareness about the importance and value of the silent work currently done by so many incredible women.

Beyond women’s poverty lies a story of millions of people living in silence but working to make the world go round. We must listen to them and recognize the efforts of millions of unacknowledged informal women workers. Otherwise they will remain shrouded in silence, unrecognized by us and forgotten by the current economic system.