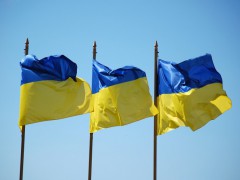 A noted and ostensively neoliberal Romanian writes a scathing reminder that Odessa is but 5 hours away from the Romanian border. The Prime Minister discusses conscription plans. The Ministry of Defense authorizes a draft medical certificate to be used in case of draft. Social Media runs wild with speculation and worst case scenarios. Russia is on everybody’s minds.

For almost a quarter century now these have been non issues. We have been living blissfully in the globalised liberal world of sanctions and non intervention, in the dream of ‘no democracy has ever waged war against another democracy’. Our issues have more or less revolved around economics: the failure of the welfare state, the bubble-spiral of the neoliberal capitalist model and the migration of jobs from former economic ‘cores’ into the economic ‘periphery’. Very few people in the Western world and its tributaries have given any thought to armed conflict and those who did, usually of a more (neo-)conservative bend were derided or branded as rabble rousers. When this happened before, such as the case of the recent Russian-Georgian war, it was mostly ignored due to other, more pressing issues.

And yet today people in Romania and elsewhere are looking at Ukraine in stunned silence as a grim reminder that ‘the old way of getting things done’ never went away and that military action and annexation is still a threat in the post-modern age. Romanians, long regaled with tales of the ‘taking’ of Bessarabia by the USSR are looking once more to the East in fear and debates on nationalism and ‘serving one’s country’ are sparking up. One has to wonder how long until this narrative truly spreads in the West, replacing quainter issues like migration and national debt. And where do Mr. Putin’s neocolonial ambitions disguised as ‘protection of ethnic Russians’ end? In Estonia? In Finland? In the Danube delta?

In the long run, Russia has very little to gain from this saber-rattling. Even if the veil is lifted and a little realism has been injected back into international relations, we still live in an interlocked world where economic sanctions are as damaging as tank divisions. Mr. Putin and, more tragically, Russia stands only to lose from aggression  as, for better or worse, much of the interconnected prosperity in the past years has been built on the promise of peace and development. Take one away and the other one will soon follow. For instance, Russia exports only a third of its gas to the EU, yet obtains two thirds of its revenues from here. Approximately 10% of Russian GDP results from its gas exports. Any erosion in Russia’s gas exports is a direct erosion of Russia’s finances.

Unfortunately that is poor consolation for an Ukraine divided by ethnic strife, and also for all the countries where ethnic Russians can serve as a quick pretext for land grabs. It also does little to assuade the fears of Romanians, Poles, Estonians and other states that share a Russian-dominated past. If war is to be a geopolitical threat once more, then maybe it’s time for fear to turn into action and discourse to turn into policy. We need a strong Europe-wide policy approach and a joint military and economic deterrence policy to counteract aggression. The alternatives are to sit idly by or escalate the threat – both mistakes of the last century that have led to disaster. Let us learn a lesson from the tragedy of the Ukraine.