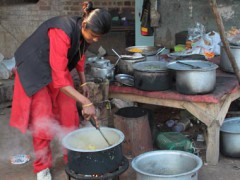 The past couple of years women have been raising their voices in cities all across the world. And it all began in the Canadian city of Ontario, sparked by a Toronto police officer’s contemptuous comment that “women should avoid dressing like sluts” if they wanted to avoid harassment on the streets. The furious response this outrageous remark generated in Ontario was echoed in cities across the world with young women staging slutwalks in prominent cities, including Delhi. The message to men was loud and clear – keep your hands off whatever we may wear.

Then came the One Billion Rising campaign that had women all over the world taking to the streets to dance and claim their space – the space on the street, the space that is public.

Ever since last year, India too has seen repeated protests by women. The biting cold of December 2012 was no deterrent to the tens of thousands of women – and men too! – who turned out to protest the rape and murder of a young woman student.

Such instances of vocal protest are mainly driven by young women, blessed with education,  living in the freedom cities provide and able to harness the power of the social media. Most of them are highly articulate and well connected. In short, they have a voice.

But what about women who have neither the confidence that comes with education nor the support of social media but still have to fend for themselves in the urban jungle?

Two major categories of women come to mind here – the homeless and the slum dwellers but in this blog I will discuss the plight of women who are homeless.

At a very conservative estimate, Delhi has at least 10,000 homeless women. They sleep under flyovers, on pavements, in drainage pipes and under staircases. According to the UN, homeless people are “those sleeping without shelter, in constructions not meant for habitation and in welfare institutions.” Even though the government provides shelters, they are few and far between. With just five shelters in the whole city, homeless women in Delhi are left to the mercy of extreme weather conditions, drunken men and starvation.

I spoke to two Delhi-based activists, Indu Prakash Singh and Shivani Chaudhry, who have been at the forefront of the struggle to restore dignity to the homeless. Indu Prakash Singh, who leads the campaign for the homeless at the Indo-Global Social Service Society (IGSSS), says: “Many of them are subject to rape on the streets, many of them are beaten by the police and sexual favours are taken…we have seen it with our own eyes how they are treated on the streets.” Singh knows because he has seen it. He has walked the streets of Delhi at night for the past ten years, speaking to and counting the homeless.

According to the paper on Homeless Women and Violence, published by Singh and his colleagues from the NGO sector: “most of the homeless women are involved in roadside vending and such related activities. They face harassment from local authorities and the police who confiscate their goods and move them on at will. Many women have no other option but to take to begging. Most of them beg at religious sites and sleep there too, as it gives them a greater feeling of security.”

So, how do women become homeless?

Shivani Chaudhry, associate director of the Housing and Land Rights Network, says: “Women are rendered homeless for a multitude of reasons. These include displacement from rural areas due to land grabbing and acquisition that results in women and their families  forced migration to cities.  On top of this, lack of affordable housing and forced evictions without resettlement in urban areas are yet another cause of homelessness for women.”

She adds that other reasons for homelessness include women leaving their homes to escape domestic violence and abuse, women being thrown out of their homes; and mentally unwell women who are abandoned by their families.

Survival on the streets of Dehli is a major challenge. With few government run shelters for homeless women and their children, they face sexual abuse, violence, rape, and police brutality. Chaudhry says: “They have no avenues available for them to seek redress or justice. No action is ever taken against police authorities or other government officials responsible for acts of violence against homeless women.”

What’s more, India’s capital has an acute shortage of public toilets for women which only increases their vulnerability to sexual violence and abuse. Many homeless women remain awake at night to watch over their young daughters as they fear for their safety. Chaudhry says that despite all the  progressive orders of the Delhi High Court, the government has still not taken adequate measures to provide for homeless women who are pregnant or young mothers.

Collective action by NGOs has created a powerful movement which means that the homeless are now included in the census and are going to be provided with more desperately needed shelters. But is that enough? Personally, I feel that the problems of  the homeless will only end once we tackle the root causes of homelessness. In other words we need to uproot deeply embedded inequality and discrimination in rural India, alleviate poverty, create employment opportunities and bring about gender parity. But not only that: we also need a drastic overhaul of land acquisition policy in rural areas and a much more humane approach to demolition, clearance and resettlement in urban areas.

Until such measures are taken and government policy-making becomes more concerned with actual people, the fight for dignity and human rights will continue. Nowhere is this more needed than for the woman on the street.