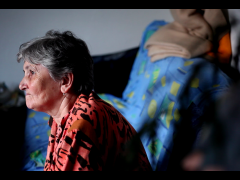 The current economic crisis has no doubt affected every country in one way or another. I can only speak of my own experience. As I described in my previous blog, many citizens of Bosnia-Herzegovina are dependent upon remittances from their relatives living in more developed parts of the world.  The 1992-1995 war displaced nearly half the population and scores of people fled the country as political or economic refugees. Others were internally displaced, and lost their jobs and homes. This was more than a decade and half ago, and while the situation has, of course, improved, I know countless families who eagerly wait the arrival each month of a supplement to their income (if they are lucky enough to have one) or pension. Remittances often help secure basic needs, such as food, electricity, heating, or medical care. In other cases, they help fund a child’s education, or help buy clothes, shoes, or perhaps a downpayment on a car or apartment. Since the global financial crisis began, remittances have steadily dried up as Bosnians abroad have had their hours cut or have been laid off from their already unstable jobs.  This leaves both them and their families in a vulnerable position. With no economic growth to speak of within the country (despite the ironic increase in the number of shopping malls), families are forced to find alternatives. The problem is that alternatives are few and thin on the ground.

Lida, a pensioner from Vlasenica, eastern Bosnia. Photo by Mirko Pincelli, from the documentary film “USPOMENE 677.”

Another effect of the global economic crisis is in respect to NGOs, a sector I am directly involved with. The infrastructure of Bosnia-Herzegovina’s civil society is largely constituted by NGOs which are dependent on foreign funding, in many cases, from Europe and the United States. The global financial crisis has severely impacted the flow of funding, which means that important initiatives which help ensure political accountability, post-war justice, or cultural development can no longer afford to function, or must make deep cuts in their programs. Apart from the real consequences of this, it also drives home the point that a civil society dependent on external funding is indeed in a  precarious condition.

It’s a double crisis in the sense that Bosnia-Herzegovina has been in a state of permanent crisis (of varying sorts) since the early 90’s, if not earlier, which has only been yet further impacted by the global economic crisis. Unfortunately, there is little we can do as individuals to battle these larger economic forces which structure our lives.

However, it doesn’t mean giving up all hope. One thing that a crisis can do is highlight that we are, in fact, all connected, and interdependent. Becoming stronger and more resilient to crisis may be as simple as recognizing that we are all neighbors, and in this together. That recognition can turn into social action in the form of increased care for one another. This cannot solve the global economic crisis, but it can help us survive it in better spirits and perhaps even find alternative ways of thriving within it.