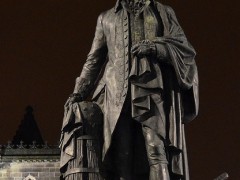 On January 18, 2006, Secretary of State Condoleezza Rice announced a new foreign policy called transformational diplomacy. Challenging old assumptions that the domestic character of other countries did not matter for foreign affairs or American security, Rice argued that:

[The United States must] work with our many partners around the world, to build and sustain democratic, well-governed states that will respond to the needs of their people and conduct themselves responsibly in the international system. Let me be clear, transformational diplomacy is rooted in partnership; not in paternalism. In doing things with people, not for them; we seek to use America’s diplomatic power to help foreign citizens better their own lives and to build their own nations and to transform their own futures.

A new era had begun, where threats to national security were not defined by competition between national governments but by newly empowered sub- and trans-national actors. Accordingly, new theories, which rejected the old orthodoxy, were needed. In practice, this meant realigning the State Department’s overseas operations to emphasize on-the-ground diplomacy and develop technological and regional acumen that could foster greater democratization. The logic rested on a fundamental assumption that democracies would prove to be better allies to the United States, be more globally responsible, and be more responsive to the needs of their citizenry. This would help solve a number of crucial threats to US national security, including terrorism, failed-states, and humanitarian crises.

An Iraqi policeman displays his inked finger after voting. / CC – US Army

There was considerable logic to such arguments. In the post-9/11 world non-state actors, particularly al-Qaeda, were deemed to be a much greater menace to national security than the traditional state armies that had threatened global peace in the first half of the 20th century. This dovetailed with the longstanding arguments of many scholars—from Wilsonian internationalists of the interwar period to modern democratic peace theorists—who had strenuously argued against the so-called realist paradigm, which viewed international relations as an anarchic competition between ever-warring states. Instead, the proponents of transformational diplomacy, like these scholars, argued that by improving the internal structure of countries, statesmen could garner greater security, and possibly even end war.

However, despite such robust theoretical support[1] and the realities of a new international order, critics have slammed transformational diplomacy as an abysmal failure and an inept foreign policy. The results of a number of key policy initiatives, including the rebuilding of Iraq, led to a perceived failure of the program and a popular backlash, particularly in Western societies, against “democracy promotion”.

One of the most poignant examples of the failure of democracy promotion came about a mere two weeks after Rice’s speech, when the terrorist group Hamas was elected a decisive majority in the Palestinian parliament. Within eighteen months, violence exploded in the region, leading the newly-elected “democratic” government of Hamas to seize control of Gaza. The Bush administration, which alongside the European Union had suspended aid to the Hamas-led government, was resoundingly criticized for the ostensible contradiction between the ideas of transformational diplomacy and the advent of a terrorist-led democracy.

The tenets underlying transformational diplomacy came under further assault as Iraq deteriorated into insurgency and then again during the Arab Spring when the Obama administration passively (Egypt) and actively (Libya) allowed mass-protests to overthrow dictatorial regimes in favor of the “will of the people”. As with Hamas, what resulted were not stylized Western states, but Islamist regimes that terrify many Western security analysts.

These instances, alongside historical examples such as the collapse of Germany’s Weimar Republic and the rise of Hitler through democratic means, have provided critics with considerable ammunition against transformational diplomacy. It is better, they argue, not to meddle in the internal affairs of states, but to work with leaders, whether dictatorial or otherwise, that will best serve American interests.

The critics do make some valid arguments. Transitions to democracy are notoriously violent and democratically-elected governments, such as Egypt’s Muslim Brotherhood, can be rooted in philosophies incompatible with Western values. Dictators generally have a much easier time controlling their populations and apparatuses of state, and thus are seemingly better equipped to meet the national security demands of the United States.

Nevertheless, what both critics and proponents appear to be missing is that it is not democracy per se that is beneficial, but liberalism. While it is true that in the West the two are intricately intertwined and many aspects of democracy support liberal principles–for example, democracy promotes the use of dialogue over force and generally encourages the division of power and checks and balances—the two concepts are independent. Democracy is, in a sense, the “means” of a system. Elections, for instance, do not define the nature of a society or nation. As the aforementioned examples indicate, severely illiberal outcomes can occur through democratic means. Democracy does not innately protect against violations of liberty or the tyranny of the majority, nor does it promote tolerance or individualism. These, however, are crucial tenets that have made the Western system so successful.

Adam Smith, one of the founders of liberal philosophy / CC – Neil_Mor8true

Transformational diplomacy arguably erred in this subtle but significant way. By promoting democracy, rather than the liberal principles that underpin Western political thought and systems, the Bush administration mistakenly emphasized functional issues over ideological. The blue-inked fingers of Iraqi citizens were extolled as signs of success, while “free and fair elections” became the byword for accession into the club of democracy. However, little attention was paid to what the citizens of these new democracies believed or the values they wanted to promote with the newly achieved power of the ballot. The illiberal nature of many of these examples is precisely what made these democratic experiments fail.

While the proponents (and critics) of transformational diplomacy seemingly missed this potential for illiberal abuse of a democratic system, it was foreseen by the American founders, who specifically instituted constitutional checks that circumscribed democracy. It was liberalism in constitutional form that served as the foundation of the American system and allowed democracy and economic success.

Accordingly, democracy is unable to achieve the national security goals of transformational diplomacy without liberalism. What is thus needed instead is “liberalism-promotion”. The underlying argument behind transformational diplomacy needs to be tweaked to focus not (solely) on promoting the functional aspects of elections and leadership-selection that define democracy, but on the principles of liberalism that underpin successful Western-style democracies. These principles are what has made the United States exceptional and, when adopted by other countries, are what will bolster American and global security.[2]

Transformational diplomacy was not intrinsically wrong. In fact, its fundamental insight—that the domestic character of other states is crucial to global security—is profoundly important. Unfortunately, its misapplication on democracy, rather than liberal ideology has given its detractors much to criticize, while weakening the arguments of its advocates. This is unfortunate. America security, global peace, and the plight of billions who are currently under the thumb of illiberal regimes will be better served by a robust foreign policy that promotes liberalism. Democracy, as one of the only practical political systems that is conducive to liberalism, will follow.

[1] For instance, democratic peace theorists cite the fact that no two modern democracies have ever gone to war. This is arguably the strongest empirical evidence for any theory of international relations.

[2] The fact that there is little security threat between Western states is a direct result of their shared, liberal ideologies and proof of the power of these ideals.