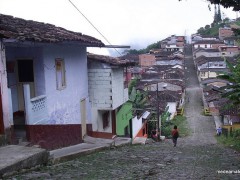 I grew up in a time when the barriers between developed countries and developing countries started becoming permeable. Windows opened and I could peek into life in other latitudes.  As I learned about lives of people in other places, I absorbed the message that development meant I should aspire to be like them. In school, we wanted to be like the glamorous people we saw on MTV. I lusted after products advertised in magazines geared to teenage girls as the “must-haves” of the season. To be cool and successful, we had to BE like the icons we saw on TV and in the magazines. Trade agreements made it possible for me to shop for the branded clothing, the latest toys or the fast food that came from worldwide corporations, all the trappings of a superior foreign life available locally. Even if no one on local salaries could afford them.

At that time Peru’s economy lay in shambles. Flour, sugar and milk were not available in the shops due to the recession and yet, there we all were, dreaming of a world apart where teens could run around dressed in the trendiest fashions piling into cars to head to the mall for hamburgers and milkshakes with their friends. We were willing to move away from home in the search of this ideal. But the really noxious thing about it wasn’t only feeling that not having these things made us lesser people, it was the pecking order it established:  those too dumb to aspire to this imported lifestyle were miles beneath even us.

My dad’s hometown of Tamesis in Colombia (photo by the author.)

As an adult now far from those days of recession, I still see traces of the clueless teenagers we were in the need to feel better than others because we have bought things, even if they were bought with borrowed money. However, I now notice something that I didn’t back then. I now see people who could have but choose not to. Those who have decided to stop listening to the blandishments of globalization and consumption, and have chosen to turn to the local, to bring out what is unique in a culture, instead of trying to be just like everbody else in an amorphous foreign mass. They’re turning to localization instead of globalization.

I first saw it in a friend who after going to Europe to get her degree not only returned to Costa Rica but moved into a rural village to live simply with cows and chickens and her dreams of making the world a better place. This raised quite a few eyebrows at the time. She focused on tangibly improving the lives of villagers through art and environmental education. She and her partner now coordinate volunteer groups in the community, and thanks to their concerted efforts, children are learning a second language, receiving education in theater, the arts and environmental awareness and are growing up in a village that is a destination not just a starting point for their lives. My friend is living out her dream as an artist, touring the country with the award-winning plays she writes and directs, empowering people in every town and village she goes to.

I also see it in my dad. As a college graduate, his first desire had been to move back to his hometown and work on the family farm, but when the farm was sold, he had to come up with a different plan. Eventually he reached his academic  and professional goals with scholarships and fellowships for his Masters and PhD, working in international organizations and  traveling around the world. Then he retired and decided to move back to the village where he was born in Colombia. In this small off the beaten track place, he now runs a weekly newsletter, is an active member of his community, and every day does what he can to help his hometown become a place where people can live and prosper, without feeling they have to migrate to the capital city as the only road to success.

Moving to the rural areas of a developing country is certainly not the only way to challenge the globalized monoculture of consumption, although I’m quite tempted to make that move myself.  I have friends here in Washington, D.C. who create and craft and enjoy making things by hand, though they have grown up immersed in a culture where buying is synonymous to patriotism. They eat local foods and shop in their neighborhood. They ride bicycles, walk and use public transport instead of driving. Making meals at home, sewing and mending clothes, knitting and making things by hand is not anachronistic, but daily life. Even if they have incomes which could support a different and more excessive lifestyle, they have chosen not to. They focus instead on personal relationships, education and experiences like taking walks to enjoy nature or evenings talking over tea and board games with friends. I’m learning from them every day.

This simple lifestyle is not glamorized or portrayed positively by the media. On television, those who turn their back on consumerism are usually doing so due to extreme religious views or dire poverty, and viewers are supposed to feel sorry for them and their choices. Yet showing a happy non-denominational person living the simple life doesn’t sell advertising. There is little marketable in this lifestyle because as you don’t need to buy anything, there’s nothing to sell. For me, this gap in advertising is liberating. At least for now, there is no pressure to conform to a certain image, and the most wonderful part of it is that it is a lifestyle where you can actually be content with what you already have, no matter where you live. I’m sure advertising is already looking for loopholes, but in the meantime, I can be happy with my choices, feeling satisfied with the riches I already have in friends and family. And who knows, maybe one day I’ll also return to my local roots, continuing my simple life in Colombia or Peru.