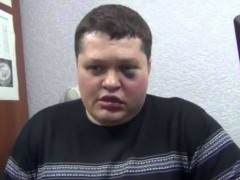 A gang of four thugs knocked Andry Dzyndzya down and started choking and kicking him while a group of some ten policemen stood by watching and smiling, appreciating the quality of the thugs’ work like true connoisseurs.

Carnage at a private impound yard (in Russian, amateur filming by Road Control):

“They would have killed me, I am sure, if it hadn’t been for my colleagues who broke through the fence and saved me,” says Andry. He and his friends are activists in Road Control, an Internet media and civil rights watchdog group. They are both journalists and human rights activists, and their group has investigated numerous cases of corruption among the Ukrainian traffic police. This time, Andry was trying to stop the illegal exploitation of car owners whose vehicles are taken to private impound yards.

Road Control vs criminals. A TV-story by 5 channel (with English subtitles):

The story began last year when Prime Minister Mykola Azarov changed legislation regulating vehicles impounded by police for various violations. The new law says: “Impounded vehicles shall be placed in state impound yards. But should the need arise, private impound yards may also be used.” Costs for confiscated vehicles in the two state-run impound facilities in Kyiv, the capital of Ukraine, are 1-2 euros a day. Privately run yards offer the same service, but at least for 15 euros a day. Right after the new regulation was implemented, police declared that the state yards were filled to capacity and started to tow away confiscated vehicles ONLY to private impounds. In truth, the state-run yards are always nearly empty. Naturally enough, Andry suspected that something was wrong—especially when many drivers informed him that the police had impounded their cars for no obvious reason and even without proper documentation. When car owners tried to complain, the police just shrugged their shoulders and said, “None of our business. It’s a private company, go complain there.”

“We‘ve established that this is a highly profitable million-euro business for the police, with private companies working hand in glove with them,” says Andry. “The ‘curator’ of the impound yards is a certain Lieutenant Colonel Tyshchenko, but the real bosses of the illegal business sit much higher up.” As the BTI Ukraine Country Report puts it, “Property ownership is weakly protected because the court system is highly inefficient and corruption is widespread”.

But where’s the substantial evidence for such widespread corruption, you might ask? In 2011, Road Control was successful in closing down one such privately run impound yard. Activists established that Kyiv police were leasing a state-owned plot of land to a private firm which charged 26 euros a day for each confiscated vehicle. The public prosecutor’s office moved to make the police pay back the money, but that came to nothing. The police paid back not a single cent, and the following year a similar scheme was set up with a different company.

Andry Dzyndzya after the thugs’ assault.

The thugs’ assault on Andry came in November 2012, when drivers decided to claim their impounded cars and Road Control activists were there filming the event. Andry was seriously injured. “The police hire thugs to do their dirty work and beat up people who don’t want to pay for private impound yards,” he asserts. Another piece of incontrovertible evidence appeared when police filed a suit—not against the gang of thugs but the journalists themselves. “We will combat “Road Control,” the head of Ukraine‘s traffic police department proclaimed.

With this warning ringing in his ears, one journalist affiliated with Road Control, Andrew Zhukovyen, applied to the US for political asylum. More than 1,500 documents confirming the police’s political motives for persecuting him were submitted. After examination of all the documents, U.S. officials gave political asylum to the “Road Control” journalist. At the moment, two of the journalists involved (Zhukovyen and Rostyslav Shaposhnikov) are living in the US and another two, including Andry, remain in Ukraine. One activist, Shaposhnikov, has come back to Ukraine to seek to protect his friends from reprisals by corrupt traffic cops.

Andrew Zhukovyen and Rostyslav Shaposhnikov in the USA.

When I called Andry, he was in Kiev’s Maidan square, where tens of thousands of people are in their second week of round-the-clock protests against the corrupt regime that has robbed them of their future. “My court session is tomorrow,” he told me. “I don’t know, maybe they will decide to put me in jail like they did in March. But I don’t want to run away from my country. Let them run!”

Since I finished writing this article, Andry has been brutally beaten and arrested. At a hearing, a judge ruled that he be jailed for a two months pending further investigations. Fellow activist Shaposhnikov fears that the police may very well take revenge on Andry and kill him in jail. Andry’s lawyer Victor Smaly was beaten and arrested too.