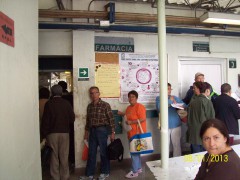 The Mexican healthcare system suffers from a peculiar disease best known as financial dysfunction. Its main symptoms consist of a constantly growing number of users contrasted with revenue insufficient to cover all of the growing needs. It thus disables the effectiveness of existing institutions and risks metastasis to the most vulnerable individuals of Mexico’s society.

Considering that only 1.77% of Mexico’s population is covered by private insurance, Mexico cannot afford to risk the quality of social security – defined here specifically as the benefits brought by the healthcare system such as medical treatment, life insurance and pensions for disabled workers – administered by the public sector. As healthcare may be considered an investment on human capital and productivity, its services are not just a matter of natural rights, but also a key factor for eradicating poverty and creating an equal society.

Mexican social security is divided in four organizations or categories: the IMSS, which is intended to take care of formal laborers and covers up to 45% of the population; the ISSSTE for government workers, the “Seguro Popular” for informal unprotected laborers, and other small Public Decentralized Organisms.

In spite of having a complex and well-structured inclusive network, these programs are not sufficiently funded. Mexico spends only 6.4% of its GDP (US $918 per capita) on social security while the average for other OECD countries is around 9.6% GDP (US $3,233 per capita) and the money obtained directly from Mexican citizens´ healthcare taxes is not enough to stabilize the balance.

To make it worse, the number of Mexicans over the age of 65 has increased by 53% in the last ten years. This fact – combined with lower levels of mortality, an increasing number of dependent pensioners, and the recent economic crises – has caused the costs of providing social security to skyrocket. Public opinion fears that the high costs and low budget of Mexican health institutions may lead to bankruptcy unless a fast fiscal reorganization is managed.

Despite an embellished percentage of 77% of general satisfaction rating quoted in the IMSS official 2011 report, there are constant and numerous complaints about prolonged waiting times, mistreatment on part of the personnel, lack of medication, and availability.

A friend of mine who used to work as an intern in public clinics shared with me several discouraging stories about doctors disconnecting the patients´ alarms while having breakfast, others devoting only 5 minutes of their time for each patient, and more generally a lack of interest in what they did (unless a nice girl or young handsome gentleman approached the personnel gallantly). Doctors are not paid according to their huge load of work, they are sometimes unprepared, and as an effect, many of them tend to be careless about how they accomplish their jobs –although of course there are valuable exceptions.

People making a line to get their medicines at the Unidad de Medicina Familiar #46. Photograph taken by Patricia Zafra.

Overall, we Mexicans find ourselves in front of a broken set of institutions that includes bad financial management, an insufficient budget, non-transparent processes, and poor quality of service. These issues drive the society towards social insecurity, poverty, and inequality.

Mexico must improve its health services; to depoliticize its decision-making procedures and to optimize the processes led by our social security institutions. Health is a universal right and it must be respected, and in fact, only through maximizing the resources invested on healthcare will we be able to avoid social crises, to ensure our laboral productivity, and to protect Mexican families. It is both a matter of ethics and economics.

Small ineffective reforms should be left apart, and instead, the basic market principle of competition should rule internally over how to achieve the best economically and socially effective mechanisms. How about establishing a system similar to the Canadian one where health is financed by the government but run by private entities? This way it would be possible to create competition among private institutions that would have to offer the best prices and service in order to obtain public contracts.

Sustainability shall be attained on the basis of a fixed budget along with carefully studied expenses, optimized processes, sufficient quotas from the affiliated workers and transparency to avoid the misusage of resources.

Creating an effective healthcare system is being one step closer to equality. Defending the needs of the vulnerable parts of society against disastrous expensive chronic diseases, taking care of our productive and non-productive population, and responsibly managing social security shall be some of the primary objectives of any effective government. In turn, it is the task of the civil society to demand what should be theirs.