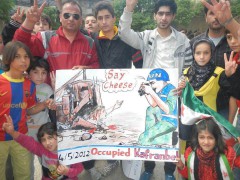 Photo of participants at the International Conference on Non-Violence, in Tunis. Taken from the Foundation for the Future website

On 1-3 November I participated in the International Conference on Non-Violence in Tunis, where activists, academics and journalists from the north and the south of the Mediterranean met to discuss regional strategies to support non-violent activism and democratic transition.  The conference aimed to strengthen solidarity and partnership between non-violent civil society actors in both regions, and asked participants: How can we achieve real dialogue and inclusive democracy between people with different political and social ideologies?

I was excited to join activists from MENA countries such as Morocco, Libya, Tunisia, Lebanon, Syria, Palestine, Jordan, Iraq, Bahrain and Yemen, and from European movements like the Spanish ‘May 15’. When I get invited to this kind of meeting I usually fear that we will stay trapped in a talking shop without managing to come up with specific working plans and initiatives, so I was happy when we moved away from analyzing the situation in each of our countries – which most of us are already familiar with – to more concrete examples of how we can unite against violence. These are some of the campaigns mentioned:

I was invited to talk about Syria, so I used this opportunity to reflect on international solidarity with Syrian civil society. During 2011, citizen solidarity helped ignite change throughout the region and the rest of the world, but over the last months citizens have witnessed attempts to divide social movements and focus on what separates us, not on our common bonds and shared values. Here are some reflections that I shared on how to fight this trend.

Photo taken from the Kafranbel Coordination Community page on Facebook. 5-5-2012

I am a Spanish-Syrian communication strategist and human rights activist. I teach Communications at Carlos III University in Madrid, where I just started my PhD. I write about citizen empowerment, human rights promotion and the social dimension of technology for several media such as Global Voices Online, Global Voices Advocacy, Al-Jazeera, El Mundo and Eldiario.es.