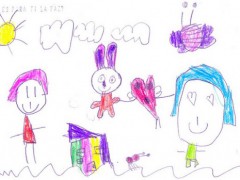 Slideshow of a series of activities (January – November 2012) called ¿Qué es para ti la paz? (what is peace for you?) directed by La Rana Encantada in Venezuela. The objective of the activity is to instill children with the concept of peace. Published with permission of the director of La Rana Encantada, Linsabel Noguera. All rights reserved. Created with flickr slideshow.

Is war a consequence of some inherent human quality? Is it unavoidable? Wars are caused by many reasons but behind them all, wars are driven and waged by human beings. What makes an ordinary man carry a rifle and shoot another man when ordered to do so? What makes a man in a position of power decide whether his fellow citizens should go and kill others in defense of some ideas? Are these ideas worth the sacrifice of hundreds or thousands or millions of lives? What makes life so invaluable that it can be spent in order to be saved?

A war is one of the most terrible things that can happen to a country, because the scars of war are carried through history, and the waging of a war removes all the certainties people have about life, nationality and belonging. These scars shape the psychology of a country for many years to come. And yet again, wars are part of the dramatic changes that have pushed the dynamics of the world’s powers, cultures and evolution throughout the whole of human history.

A great number of human beings on this planet owe their mere existence to redistributions of people, and whole cultures have undergone transformation after suffering defeat or enjoying victory in war. I am one such case, a consequence of war. My grandmother left Russia during the revolution and civil war for Constantinople (Istanbul), where she met my grandfather and married him. After nearly 20 years of wandering from Germany to Poland as stateless Russians, war broke out again and they lost everything. Somehow they found their way to Venezuela where she and my father decided to stay after my grandfather’s passing.

I grew up hearing my grandma’s stories about her life as a stateless immigrant in Europe, mixed with the hardships of starting all over again from scratch twice in her life, and about survival during times of war. For me, all these  tales seemed so distant, like a movie, so unbelievable in the context of this generous Caribbean country. But my grandmother’s tears and my father’s silence were eloquent and real when a hopeless nostalgia invaded their souls. My father and grandmother never saw their family or friends from those years or heard from them again. And I realised how deep and ripping of a pain that must have been when I got to live far from my own country for 10 years. Sometimes I asked myself what if I never could return and see my sisters and my mother?

War dispossesses people of their sense of belonging, of order, and exposes their fragility;  life completely loses all value under fire as familiar places are destroyed and violence displays its crude essence.

In the campaign for the presidential elections in October 2012, Hugo Chávez  preached that there would be civil war if he was defeated. Chávez won so Venezuela didn’t have to be tested.  However, a lot of analysts say that we are already at war as the political divide seems irreconcilable.

Furthermore, the average citizen feels that Venezuela is living another war, the one common criminals are imposing on the population with waves of kidnapping, and robbery with murder, the violence that has made many of them decide to flee the country for a life without paranoia and expensive security measures like those described by Marina Belloso in her article “La carísima paz”. Venezuela  has one of the highest crime rates in Latin America according to UN reports. Impunity and a weak judicial system, arms trafficking, drug trafficking, and highly confrontational politics have all inflated violent crime in the country. There is virtually nobody, myself  included, who hasn’t lost some friend or relative to crime. Life doesn’t have any value, just like in war. This situation has given rise to various groups and NGOs like the group Red por la paz (Network for Peace) which aims to build a culture of peace through the work of the organizations: Quiero paz (I want peace), Plastilinarte, La rana encantada, Pro, Fundación Taap, Collectivox, Quincalla Zoco, and Fotógrafos por la paz; and others like “El observatorio venezolano de violencia” (Venezuelan Observatory of Violence), that periodically publishes reports about violence in the country, the latest of which states that in 2011 19,336 deaths were due to crime.

I wish my paternal family hadn’t had to suffer and see and live through the terrible things they have, and I would rather not live if that pain could have been avoided. But something this convoluted world of ours has shown us is that we humans seek happiness and prosperity no matter what and only death can deter us from achieving those goals. In times of adversity we just keep going in order to stay alive. No, I’m not saying anything new, it’s a cliché shown in a thousand war movies, but it’s also true, deeply and painfully true, when we have to live in fear and violence.

I don’t believe that we are at war, or at least I don’t want to believe it. Things are difficult, no doubt, but there is room for reconciliation, understanding between parties, and developing  our political system. I have faith that we all want peace in Venezuela.

What makes humankind go to war, to see no other option – at some point – but embarking on a violent conflagration to solve a conflict? I can only guess it’s the same determination that makes us seek peace. We are inherently capable of violence and we instinctively understand the power of force. But we also know the power of words and negotiation and understand the common sense of peace. I am certain that all wars can be avoided. Surviving wars and keeping peace are matters of willpower and resilience. To have peace, all the parties involved must be committed, which is usually not the case. So the questions are: when will we humans stop making war inevitable, when will we understand the need to accept the other and embrace their differences, and find the common ground that allows peace to be permanent?

For the ones that want to know more about Red por la paz: