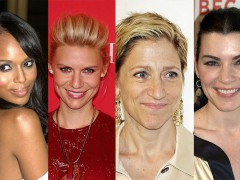 For the past year or so, I’ve been really hooked on American TV shows. I make a list of all the ones I’m watching and all the ones I plan to watch. However, I’m very choosy about it: I only pick the ones where women play key roles or the ones that pass the Bechdel Test. The Bechdel test is used to analyze whether a film, TV series, or story has gender bias (sexism in general). To pass the test, the story has to (1) have two named female characters who (2) have to talk to each other about (3) something other than men. Easy as it sounds, the vast majority of entertainment productions don’t pass the Bechdel Test.

Of course I watched series like Sex and the City, Friends, and now Girls. They taught me a lot and gave me fun ideas about how to survive in a man’s world. But I really feel that I can feed my brain better when I watch Alicia (The Good Wife), Jackie (Nurse Jackie), and Carrie (Homeland — Claire Danes deserves every Golden Globe and Emmy she gets): they show how women are at least as complex, intelligent, and capable as men.

Yet at the end of the day, despite their sheer awesomeness, they’re all just characters on TV. But the interesting thing here is that, sometimes, these awesome characters are inspired by real-life women (kudos to Kerry Washington in Scandal, who plays Olivia Pope, a character based on the former administration’s press aide Judy Smith).

Thinking about this year’s International Women’s Day and Working Women’s Day in general, I want to talk about two women who followed their passions and worked to make the world a better place. Even today, their lives serve as shining examples to me and to all Brazilians — women and men alike.

I picked Chiquinha Gonzaga and Olga Benario because I truly believe that their work helped shape how people view the power of women in society. That Brazil has a woman president today and a great many women executives is due in part to Chiquinha and Olga, who both set out in a much more difficult time.

In their own ways, they started their own revolutions by not just doing what they were told to. Their work, one as a musician and the other as a military agent, shaped their lives and the lives around them. Is there any better legacy than that?

She had the courage to follow her passion and her own mind back in the middle of the 19th century: she divorced, married an old lover, raised a child alone, and had a great career as a musician. But above all that, Chiquinha was also an active citizen who fought for the abolition of slavery in Brazil. The daughter of a marshal and a black woman, Chiquinha, among her other accomplishments, became the first woman to conduct an orchestra in Brazil.

In the audio below, you can hear one of her compositions called “Atraente”:

She knew how to fly airplanes, ride horses, and fake documents. She could shoot short- and long-range guns, spoke five languages, and came to Brazil to act as a bodyguard for a man: Olga Benario, a German revolutionary and Comintern agent from the 1930s, who became the wife of one of the most famous communists and human rights activists in Brazil, Luis Carlos Prestes.

Her life inspired great biographies (yes, plural!) in several languages. Fernando Morais, a Brazilian journalist, wrote one called Olga, which then inspired a movie of the same name.

She came to protect a man, but they fell in love, and Olga and Prestes became a couple. However, the then-Brazilian dictator, Getulio Vargas, expelled her to Germany, where she had her child in prison. Eventually Olga was sent to Ravensbrück concentration camp and from there to Bernburg Euthanasia Centre in 1942, where she was gassed.

So, for this International Women’s Day, I want all of us look around at our cool aunts and sweet and strong grandmothers. It’s always good to see great women on TV, but it’s much better to acknowledge them in our real lives.