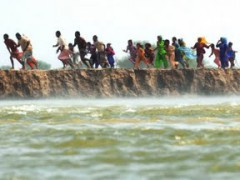 Pakistan faces a multitude of issues but availability of clean drinking water is perhaps one of the most threatening, especially after the ravaging floods of the last two years. As was pointed out in an earlier post by my colleague Maria, 60% of the infant mortality rate in Pakistan is due to water borne diseases.

What is important to understand though is that realities on the ground sometimes act as barriers to the provision of clean water in the post flood scenario. Usually flood victims camp out in the open wherever they can find dry ground, and the only access to water they have is in the streams or flood waters around them which quickly become contaminated as they are used for washing and sanitation, not to mention the number of dead animals decaying in them. This is a fact that anyone involved in ground relief work is familiar with as most of the medical issues to be dealt with are skin diseases, diarrhea and stomach infections.

In the course of our relief work we in Sarelief – a community based initiative – tried several times to take clean water to these stricken areas but our efforts only met with abject failure. This was not just limited to us alone as we also saw several NGOs as well as the UNDP and other international aid organizations bringing in everything from jerry cans that filtered water to make it drinkable to small sized filtration plants –  all to no avail.

The reason is so devastingly simple we found it unbelievable at first: IDPs (internally displaced persons) do not like the “taste” of filtered water. In fact while out distributing more than 9 trucks of mineral water I often found the IDPs using it to wash their hands or utensils or to my horror emptying it out on the road and refilling the bottles from the flood waters surrounding them for this very reason. They called it “city water” and thought it tasted “funny”

After detailed discussions with some of them, I learned that as there were no proper water sources available even prior to floods, water is drawn from wells. Now it is common knowledge that ground water is usually sweeter and earthier in taste than filtered water and this is the difference the IDPs do not like. Therefore instead of filtration systems or mineral water, circumstances dictated that we engage in boring and hand pumps in these areas to provide IDPs with a sustainable water supply.

Another issue often touted out is the inability of authorities and ministries in this part of the world to deal with a post disaster scenario. We often tend to talk of how the government here is unable to do anything. However we seem to forget two things when we play this blame game:

The very recent rain disaster in Badin around August last year affected more than 6.5 million acres. There were more than 8 million people at this time on the roads under the open sky. The largest single camp maintained by the army held in excess of 750,000 people. Suffice it to say that the scale of this disaster was so enormous that any prosperous and well prepared nation would have faltered before it, let alone one riddled with debt and inefficiency.

With the world watching and dragging its feet to help, Pakistan’s authorities did what they could with whatever resources were at their disposal. Could they have done more? Of course they could but more requires a lot more money. The gap was filled by organizations from the private sector and even though much was lost in terms of livelihoods and precious human lives we still managed to survive it as a nation.

So even though clean water, dry land and a roof over one’s head are some of the basic necessities every person is entitled to, making them possible for all in a post disaster scenario – to put it mildly – often tends to become an impossible task. What is needed now that the worst is over is a sustained effort to rebuild the infrastructure and provide adequate drainage, sanitation and water delivery systems for the ravaged areas. For this we need to widen the tax net in the country to collect more revenue and rely on that more than on foreign aid to power our development as a nation. Self reliance is the way forward and it’s about time we started.