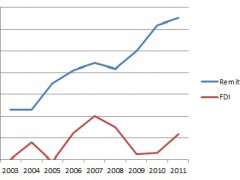 When the financial crisis hit the Western world, a saying spread throughout Macedonia:

‘We can’t be hit by the crisis, we’re always in crisis’

This was very true at the time. The financial crisis of 2007-2008 brought the collapse of powerful financial institutions and caused a downward spiral in the stock markets of New York, London and Tokyo. Unlike the interconnected financial markets, with limited openness in its capital accounts Macedonia was passed by the first wave of financial mayhem. In 2008 when the US and UK national governments were bailing out the “too big to fail” private banks, the Macedonian GDP growth rate stood at a high of 5%. But not for long. Foreign direct investments (FDI), widely considered as the only way to improve our economy, decreased from 506 million EUR to 399.9 million EUR in 2008. Export-oriented sectors like the metal and textile industries also felt the drop in demand. The big factories as Jugohrom, Skopski leguri, Feni halved or stopped production and sent their workers home. This had been a familiar hardship faced by Macedonian workers ever since the times of privatization, hence the saying on the crisis.

When you’re always in crisis, you learn how to live with it or run away from it. When you know that you’ll never be able to earn enough to buy your own house, or you’ll never be able to provide for your children on your regular salary, the “way out” of this permanent state of crisis is to go work somewhere where you’ll be able to earn that kind of money. That’s what many people from Macedonia have done. Families have been able to make ends meet thanks to the remittances sent home by husbands, fathers and sons working in better off countries. Remittances sent back to Macedonia have proven to be more powerful than the global financial crisis itself. Since 2003 they have been on an almost unbroken upwards trend from 557 million EUR to 1.404 billion EUR in 2011.*

The flow of private financial transfers decreased slightly in 2008, the key year of the financial crisis, when they diminished from 998 million EUR in 2007, to 936 million EUR. However, in all the other years more and more people have been going abroad and sending back money to their families. Remittances have compensated for low FDI. In 2011 they were five times more than FDI in the country (FDI in 2011 came to 336.8 million EUR). In this way, they have sustained the stability of the country’s GDP as they make up about 20% of it.

FDI and remittances to Macedonia from 2003 to 2011. Amounts are shown in millions of EUR.

Why has the inflow of remittances to Macedonia risen in times of global economic crisis? The question has not been well researched.  Probably, it is partially a result of people migrating to work in countries not directly affected by the crisis. Besides the always attractive USA, Italy, Switzerland and Germany, many people – and in particular a notable portion of the population of the cities of Kumanovo and Tetovo  – have gone to work in Iraq or Afghanistan. The migrant workers in these countries send up to 50,000 EUR a year back home. The money is spent for everyday support of the families, buying and renovating houses, and some is deposited in the banks. The way to stop being dependent on remittances would be to put them to productive use through investment.  This seems to be the case in Tetovo, but unfortunately not in Kumanovo.

So, the saying remains popular. Next time you’re in Macedonia, don’t be surprised if someone quotes it to you.

*Data on remittances and FDI are taken from the National Bank of the Republic of Macedonia www.nbrm.mk