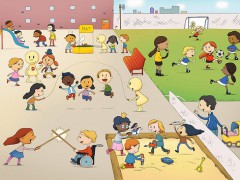 Whether there is a desired role for women in a specific society or not, social exaggeration is always possible. Below, I’d like to give two examples from Northern and Central Europe of how the mark can be overstepped.

How gender-equal a society is nowadays – this is one question. How gender-equal it will be in 30 years, however, is quite another one. Naturally there is a strong connection between the two: what our children see today will influence the society they be living in in 30 years.

One of my stories comes from Sweden, the role model country of gender equality, the other is from Hungary. Seeing them next to each other will hopefully show the huge differences we still encounter today, even in the European Union.

Sweden is often seen from outside as a paradise of social equality, especially gender equality.The Global Gender Gap Index ranked Sweden as the world’s fourth most gender-equal country in 2012. Take paternity leave, for instance, the time a father spends at home with his children while still being paid. Parental leave in Sweden is 16 months, 2 months of which must be taken by the father.

However, it’s not just gender equality that is popular in Sweden but gender neutrality as well – and this issue is most important for children. Sweden is committed to raising children free of gender stereotypes. Some parents and institutions are willing to take radical steps in this direction. Egalia, a preschool in Stockholm, has become famous for its completely gender-neutral toys, books, and decorations that avoid gender stereotypes and any traditional presentation of gender.

The approach has its effects on the language as well. The preschool tries to avoid words like “boy” or “girl”. Moreover, a new, gender-neutral personal pronoun has been seriously proposed: hen, to replace han (=he) and hon (she).

The problem is, while freeing children from gender taboos and rules, the advocates of gender neutrality find themselves saddled with a new set of rules for regulating language or banning free playtime (so as not to let children reconstruct gender stereotypes) or throwing away toy cars as gender-coded toys – all of which has happened in some Swedish preschools.

Hungary is also making news about education and gender roles in the family. After making divinity (and ethics for non-religious students) a compulsory subject on the school curriculum, the question now turns to who is eligible to teach ethics to children.

The Association of Hungarian Parents said that a teacher who is divorced, who doesn’t have children or who smokes shouldn’t be allowed to teach ethics! Prospective teachers should be screened in advance to ensure that they all lead  exemplary lifestyles.

The following day, however, the association claimed that all it wanted to do was grab some attention to highlight how unsustainable the legislation on ethics education is. Their proposal was meant to be ironic.

Be this as it may, nobody was surprised by such a proposal and that’s the whole point. A significant part of Hungarian society sees the traditional family pattern as the only correct one: one mother and one father, connected by marriage, and with children – the more children the better. You are not a second class citizen if you can’t follow the pattern, but the pattern is definitely there. In Sweden, there is no such pattern, and the official goal is to raise gender-neutral children free of any stereotype.

Which way is better? In my opinion both ways can work well but extremities are always possible: children who don’t consider themselves either male or female and children who are told that only married non-smokers should be allowed to teach ethics. If we can keep somewhat to a rational middle path, in 30 years Swedish and Hungarian children will understand each other when it comes to gender roles – and that would be great!