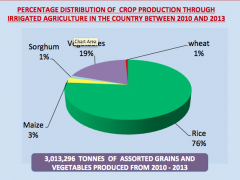 If we got paid for all the times we heard ‘water is life’, we probably would not need it anymore; we’d be drinking, bathing, and doing everything else with gold – that’s how wealthy we’d be.

How important is this most vital of natural resources? On the 28th of July 2010, the United Nations General Assembly recognized the human right to water through Resolution 64/292; acknowledging that access to clean drinking water and sanitation are essential to every other human right.

There are several other charters passed by different international organizations that dictate what levels of access to water around the world are acceptable, and what countries should aspire to. They all agree that water should be sufficient (for personal and domestic use), safe (free from germs and harmful substances), acceptable (should look and taste a certain way), must be accessible (within 1000 meters of the home according to the World Health Organization), and it should be affordable.

So, what’s the story in Nigeria? How close are we to any of this?

According to Water Aid, about 97, 000 children die in Nigeria every year from diarrhea caused by unsafe water and poor sanitation, and 63.2 million people do not have access to safe water.

Water Aid works in 100 communities across six states in Nigeria so it might be tempting to dismiss their statistics as over-zealous prospecting. Closer to reality however is NOI Polls Access to Clean Water Snap Poll done in February 2014 that sampled 1,072 people above 18. Their report shows that 83% of Nigerians source their drinking water privately, and 47% of Nigerians find clean water a major challenge.

In January 2011, the Federal Government launched the ‘Nigeria Water Sector Roadmap’ a document that details the government’s plans for providing safe and clean water up to 2025, and says that 75% of the country will have access by 2015. Question is, how far have we come with that?

Water is doubly, maybe even triply, important in Nigeria because our electricity depends on it to a very large extent, because it supports our agriculture (more like it creates an enabling environment for it), and also because it supplements the efforts of the Ministry of Health.

What then has been done?

Recently, the Minister for Water Resources, Sarah Ochekpe presented a report detailing the scope of work, achievements and pending tasks of the ministry in the last four years.

According to the report, 37 dams have been completed, 10 were rehabilitated, and there are 149 currently under construction. Of the completed dams, 16 have hydropower potentials capable of generating over 135 megawatts of electricity. With current generation and distribution numbers at 3700MW on average for approximately 170 million people, we obviously need all the wattage we can get.

We can only hope due diligence was taken with the construction and rehabilitation; we cannot afford a repeat of a dam failure that the residents of Gusau in Zamfara state suffered in September 2006.

On to irrigation, the Ministry boasts of 385 formal and informal projects since 2010. When all have been completed (there are 185 in various stages of construction), it will produce 397, 060 hectares of irrigable land, thereby increasing opportunities for subsistence and commercial farmers.

Access to clean water has grown from 58 to 67% according to the Honorable Minister, and the National Water Supply Sector Reform programme initiated by the ministry in collaboration with development partners like the World Ban project impacting the lives of another 30 million positively.

There are several other campaigns the ministry of water resources is plugging into; the End-Open Defecation and Global Handwashing Campaigns championed by the United Nations, the G-WIN (Girls and Women in Nigeria) project with the Ministry of Finance, among others, including trans-boundary water initiatives and agreements.

It appears that the Ministry appreciates the relationship between clean, accessible water and the social/economic development of Nigerians; they have also taken the initiative with the Ministry of Power to work with the private sector to put hydroelectric turbines into dams in the country. It must now double its efforts to ensure it closes the gaps standing between Nigerians and this basic right.