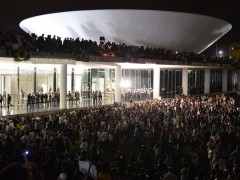 Protests, Poverty and Prosperity in Perspective

2012 started with a bang in Bucharest. The usually sedate Romanian capital erupted with protests the likes of which had not been seen for at least a decade. At first glance it seemed that people were angry with new healthcare legislation and the ousting of a popular minister. But in reality the protests continued even after the bill was struck down and they saw out the government and almost the president as well. The protests,  you see, had less to do with healthcare and more with austerity.

Austerity has become a rather ominous word in this age of crises and has often been linked with protests across Europe. And yet, while Greeks or Spaniards are quick to rise up in anger over austerity measures it has become somewhat of a joke in Romania to say that “polenta doesn’t explode” in other words that Romanians don’t take to the streets like some of their more belligerent cousins. When the government sliced a whopping 25% out of all public employee pay checks a few anaemic protests were all that Romanians could manage. Then, in the coldest month of winter the polenta finally did explode and it nearly took the whole Romanian political class with it.

The recent protests in Turkey and Brazil, however, are outliers in a sea of economic woes. Brazil isn’t the wealthiest country in the world but it has weathered the crisis years effortlessly. Turkey is doing even better. And yet the two star pupils of the world economy are facing greater popular uprisings than some of the hardest hit eurozone countries. The reasons of course are different. Turkey’s protests erupted from fears that the country is ‘closing up’, that it is becoming increasingly conservative, while in Brazil corruption and cronyism spurred the uprising. Yet in both countries, just like in Romania the trigger for the protests was some relatively minor, unrelated matter.

Protests in Brazil triggered by a bus fare increase have morphed into something bigger. photo courtesy of Agência Brasil | CC BY 3.0 Brasil

Romanians, Spaniards, Brazilians and Turks have all risen up against measures that they see as unfair. Yet although their motivation is different, there is one common denominator that unites them all.

I believe this common denominator is the idea of freedom. From the American Revolution to the French Revolution to the present-day, lack of freedom has been the main catalyst for social change. In the recession-hit countries stringent government measures have encroached on the economic freedom of individuals. After all you can’t really have control over your economic life when the government arbitrarily decides to cut your wage by a quarter or when ‘austerity’ measures drive entrepreneurs into bankruptcy. Conversely in the countries where authoritarianism is rearing its ugly head another facet of freedom is being encroached on, liberty. Liberty is the ability of individuals to have agency, control over their own lives, and in countries where rampant corruption and iron-fisted authoritarian rule hinder the natural drive of people to better their lives or where reactionary measures are actually restricting their rights and changing their way of life, uprising often seems like the only option.

Austerity, the great threat looming over Europe is just one aspect of a greater issue, the slow increase in top-down authoritarian and liberty-curtailing measures in both new and old democracies. But in this age of social media and Internet freedom the people are quick to rally against a cause that they see as unfair, often setting movements that span the whole of society into motion. And if the protests in usually docile Romania prove anything, it’s that when you turn up the heat too much, even maize will boil and burn.