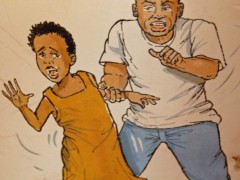 During my recent visit to Soroti in Eastern Uganda which is 350 km from Kampala, I was overwhelmed by incidences of child marriage, cases of rape and defilement which are some of the major problems children in this area face.

EVIL AGGRESSION. A poster in a third grade classroom at one of our Ugandan children's homes

For the one week I spent in the area, helping out with a film crew of Mini-buzz Show (a local television programme airing on NTV Uganda), it came to my understanding that the problem is so severe that some 700 girls have dropped out of school because of early pregnancies and marriage.

In this land, we met a 5 year-old girl who had been raped (defiled) by a man six times her age. Her father had gone ahead to connive with this 29 year-old offender to pay money so that the case would not see the face of the courts of law. The young girl lives in pain, walks with difficulty and has developed a dislocated limp.

Defilement, which is essentially rape of children below age of 18, is a very grave and serious case in Uganda. Aggravated defilement, which happens between an adult and a minor below the age of 14, attracts a capital punishment on conviction.

Because of poverty and sheer ignorance and perhaps to dodge the law, parents often connive with offenders to make quick cash out of their defiled children’s misfortune. Many blame poverty for this. But again in the rural setting where people’s mind set is still inclined to the idea that the man rules the world, girl children are not treated equally as their boy counterparts.

In this day and age, some parents still view girl children as tools for making money through bride price. This attitude has locked girls in early and forced marriages with men fit to be their grandfathers. Faced with such mentality, the girl child education still ranks at the bottom of most families’ priorities.

At Amacet Children’s Home in Soroti District, we caught up with 12 year-old Helen, who has dropped out of school because of an early pregnancy after she was defiled. Helen who is just 2.5 feet tall was in primary three (the third class of her elementary education). She is now a 6-months-old expecting child mother.

When I looked at Helen with her protruded belly and her short stout height, I was very indignant at how uncouth some men can become. My thoughts flashed back to my 12 year-old sister whom I am staying with and paying for her education. My sister is now in Primary Five. God forbid, I paused for a moment after being overwhelmed by emotions, I wondered if this had happened to my little sister what I would do. I fumed with anger.

For Helen it is a step backward in her education. The defiler has already spoilt a year of her education. If she gives birth normally, which according to the gynecologist is highly unlikely, she will take one or two years babysitting and breast feeding her child. In all, the evil thoughts of the defiler have caused a permanent scar in the life of this toddler.

Statistics from police indicate that in April alone, 221 cases of defilement were recorded in eastern Uganda and were committed mostly by close relatives. The Soroti district probation officer said school heard teachers are sometimes to blame since they do not follow up on children who fail to turn up for school in weeks. The probation officers said if the teachers were doing their work well, they would have helped in sensitizing the parents and children on dangers of early marriage and defilement.

Most girls who are raped stand the risk of catching the deadly HIV/AIDS, but according to Helen’s current care taker she was lucky to test negative to HIV. For now, all that is needed is to give girls like Helen and the 5 year old toddler, hope and protection from devils of marauding men who are out there to spoil their life and life.

How do we protect the young ones of these evil-mined men in the Soroti District of Uganda? What policies are in place for such children who’ve been abused sexually?