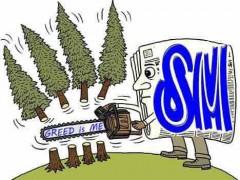 Simple wisdom resonates in the lyrics “they paved paradise to put up a parking lot” belted out  by vocalist Adam Duritz of Counting Crows  in the music video ‘Big Yellow Taxi’ .

The irony of his words was not lost on 125 Filipino environmentalists who staged a lightning rally in one of the biggest malls in Manila last April to protest the mall owner’s uprooting of some 40 alnus trees in a city 240 kilometers away.

Shoemart or SM (the mall) ‘earth-balled’ the trees in Baguio City – one of the few places in the Philippines that still have a decent tree cover – so they can expand their parking lot. (‘Earth-balling’ means the roots of the trees are preserved so they can be planted again. The environmentalists thought  the earth-balling was not done right).

It was, as critics said, a classic case of corporate greed. But SM said they will re-plant the trees and plant 50,000 more.

There is a danger  however, when the debate is solely limited to the framework of environmentalists versus big corporations. Besides  the case of tree-cutting, the same conflict arose in connection with the Philippine government’s proposed policy on mining – President Benigno Aquino III wanted to amend the existing policy to generate more employment. Once again, this created problems for environmentalists because of the mining industry’s checkered past in the country – no one has forgotten the tragedy in 1996, when 2-3 million tons of mining waste from operations of Marcopper mining company leaked into the Boac river.

The pursuit of sustainability would never make any significant progress if the debate is only shaped by divided views. Reform is a process which should be inclusive. The roles of different political actors and local communities should be recognized and their inputs considered.

There should also be transparency. How did the company get a permit for cutting down the trees, or operating a mine, or turning an agricultural area into a residential zone? How will these actions benefit the company and the local community concerned? What are the risks considered?

The question I raised in the title – would you pave paradise to put up a parking lot – can be seen as open-ended, but the reasons behind a straight  “yes” or “no” answer might not be as simple or straightforward as you might think.

Before we address the issue of whether the route we should take is via policy-based solutions or market-based mechanisms, we first need to establish that making decisions that concern environmental reforms is consultative in character. Once more, ultimately this is a test of governance for the Philippines where deals and decisions are often made behind closed doors.

Transparency is necessary especially when money is involved; this may be in the form of fines for erring companies or green taxes.People need to know why funds are needed and the money actually goes.

Consequently, basic concerns should first be addressed: we need first to build mechanisms for participatory policymaking and feedback.

Why should the ‘paradise’ be paved? Why do we need the ‘parking lot’? Is it because we need to generate more jobs? Is this the best option left open to us?

Let everyone first understand what the problem is – and then we can come up with the appropriate solutions.