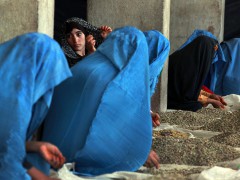 The questions of women in the workforce and how that affects society’s fabric have been posed since the early days of the feminist movement.  The question of what is gained – or lost – as women assume a larger role in a country’s economic burden is not so much just about the economic aspect, but spans the issues of the political, social and cultural impacts as well.

As a young woman growing up in a Western country with heritage and cultural influences from the East, the question of women’s role in society more broadly has been of interest. The different cultural expectations of women, and the interestingly underlying and sometimes unexpected similarities give an indication of how far women have come, but also how far we still have to go.

In terms of what is gained, there is much to be said. From a numbers point of view, between 1984 and 2009, the number of working women has increased from 44 million to 72 million (in the US).  Not only do the sheer numbers of individuals contributing to the workforce make a difference, but women are said to bring particular skills to industry that change the tone.

Women are said to be more intuitive with different values, including empathy and support.  They are also said to be better team players and are able to look at problems more holistically.  On a more extreme level, workers in traditionally male dominated industries such as oil rigs have anecdotally welcomed women as they “make it seem more like the real world” and “bring a different mentality so we even end up talking about different things”.

These are all sweeping generalisations though; can it really be said that “all women are empathetic” and that is why they are good for the marketplace?  Is it fair to pigeon hole an entire gender into an expected set of stereotyped values?

Perhaps these generalisations are more damaging than beneficial and are part of the reason women are thought of in a particular way, limiting their ability to contribute in a meaningful manner.

An interesting article on the Financial Times also questions this focus on “what women bring”, concluding that perhaps it just comes down to the skill set of the individual and this is where the focus should remain. This particularly applies to women in senior and leadership positions in companies.

Or to put it another way, the women who “make it” perhaps do so because they are far better than the men. It might mean the focus should be less on “what women bring” and more on getting them into leadership roles in the first place.  (Source)

Generalisations aside though, the increase in the number and proportion of women in the workforce does have implications on society more generally. There is no more obvious platform for this societal shift than of the oft asked question “Can women have it all”. Interestingly, it is a question posed usually by women themselves.

Anne Marie Slaughter’s well read essay in the Atlantic, “Why Women Still Can’t Have it All” in 2012 was a profound example of an ambitious, accomplished female role model who argued that women weren’t able to have it all – ‘all’ meaning an ambitious career and a fulfilling family life. The article, based on Slaughter’s personal life as a senior US Department of State employee, provoked responses from around the globe and shocked many, opening up a public conversation about what the result of having women in the workforce meant for our society.

It would seem that from a purely economic point of view, having women a part of the workforce and contributing to nation building in a corporate sense does nothing but improve, gain, increase and enrich productivity and our work place environment. Where things are perhaps lost is not in the office or on site but outside that world – in homes and within families. This is not to say that having women in the workforce is purely detrimental to families, but that society needs to accommodate the fact that women spend more time away from the home and the resultant shift needs to be accounted and allowed for. Society has accepted that women are part and parcel of the working world, now the cultural change needs to follow so that the overall outcome is of one positive benefit for all.

Women collectively breastfeeding for IWD – the right to work and family, by Amadeus Sanz, on Flickr, 2008 CC BY-NC-SA 2.0

Sometimes images like this suggest that even with women in the workforce and contributing to our society, mentalities still have a way to go.